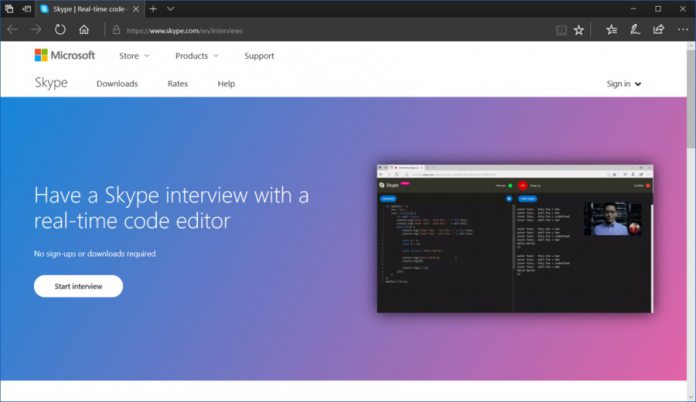 Microsoft is giving its Skype service a fresh new ability. Starting today, the communication app has a new code editor. With the addition, users are able to code in real-time while in a call with a contact. For the gate, Microsoft has added an array of supported code languages.

“This new preview feature allows you to have a video call on top of a code editor that runs in your Microsoft Edge or Chrome browser (version 32 or above). It only works for browsers set to English. You just need Skype.com—no other apps to download.”

Microsoft says the code editor is for Skype users who want to interview. Specifically, interviewers assessing engineering and coding abilities in a candidate. That’s not to say the feature cannot be used by all Skype users.

For example, a user could write a program and share it live with a contact. It would also have benefits for programming students and workers in a collaborative effort. It is worth noting, however, that the code editor is not currently available for the Skype desktop app. Instead, it is rolling out on the web version on browsers.

Microsoft has recently overhauled the Skype experience. Far from a lick of paint, the company completely change the look and feel of the service across platforms.

The fresh look Skype comes with a lighter and more efficient experience. Microsoft borrowed off rivals like Facebook and Snapchat to modernize the app. Among the important new features in the new Skype are Highlights and additions to Bots and Add-ins.

Skype is now more customizable with colored themes, while users can also use emoticons in video calls and chats.