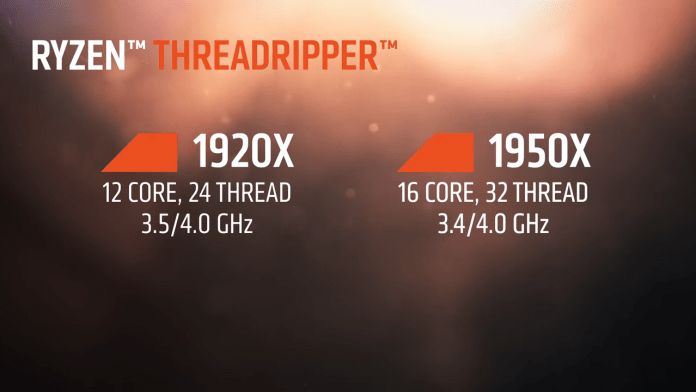 It seems that AMD may be onto another winner with its Threadripper CPUs. The chipmaker has revealed the prices and details for its high-end offering, and it looks very promising.

When compared to Intel’s Core i9 family, the new Ryzen CPUs will have discounts of up to $1,000, and will likely hit the market first. We now know the following:

Of course, that insane reduction in price is worth nothing if the performance matches it, and we haven’t had any real benchmarks. We have, however, seen some promotional material from AMD.

Of course, this isn’t quite a fair benchmark, as it pits AMD’s next-gen tech against Intels last generation. Naturally, though, AMD can’t get hold of an i9-720X just yet, so it’s the best idea we have for now.

Whatever the final comparison, it’s clear that AMD will at least have some kind of foothold in the high-end market.

“This is an important positioning play for AMD as having a great high-end helps sell the mid-range, but I think they’ll sell every one they make,” said Moor Insights analyst Patrick Moorhead. “Video professionals, developers and consumers who want to say they have the best in technology will gravitate toward Threadripper.”

Threadripper chips will begin shipping alongside motherboards in early August, and will also feature in Alienware’s Area 51 systems, which are available for pre-order on July 27.