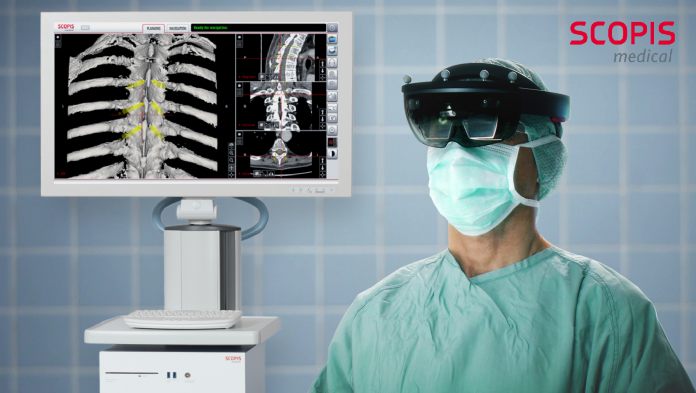 The number of companies using Microsoft’s HoloLens to enhance their services is growing. The mixed reality headset has been finding development partners increasingly this year. Scopis, a company that provides medical augmented reality and hybrid navigation solutions, is the latest to use the benefits of HoloLens.

Scopis has announced a new Holographic Navigation Platform that leverages Microsoft HoloLens. The company says the surgery-focused platform is the first of its kind. It uses mixed reality and uses the headset for minor open and minimally-invasive spine surgery.

In a press release to announce the platform, Scopis says it was created to “offer surgeons greater precision, and speed, and better outcomes for patients undergoing open and minimally-invasive spinal procedures.”

By using the Holographic Navigation Platform, surgeons have the ability to pre-plan procedure alignments for pedicle screws.

“To use the Scopis Holographic Navigation Platform during such an operation, the surgeon wears Microsoft HoloLens glasses, which communicate wirelessly with the Scopis system. The planned positioning of the pedicle screws is projected onto the surgeon’s field of view and overlaid exactly onto the patient, creating the mixed reality experience.

This allows the surgeon to find the screws’ planned positions faster and to align surgical instruments interactively with the holographic visualization.”

Scopis says the use of mixed reality will ultimately bring benefits to patients. Surgeons will be able to reduce the levels of radiation exposure from fluoroscopy devices. Additionally, the results of operations will be more accurate and with lowered recovery times.

The holographic platform will also use HoloLens to place gestures on visual fields in front of surgeons. This allows surgeons to retain their field of vision in the operative area.