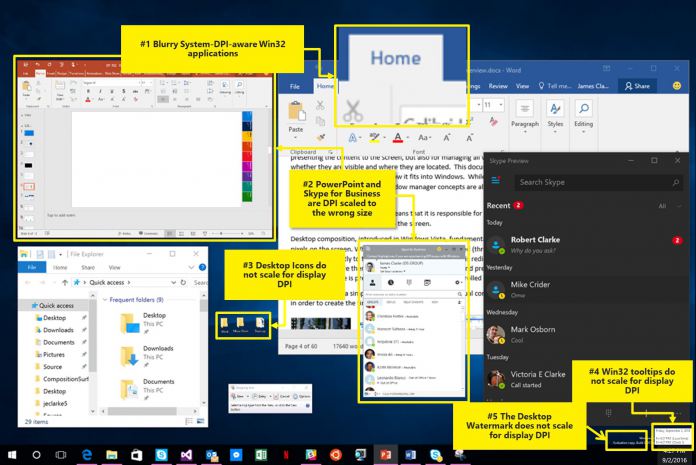 Microsoft is continuing to detail some of the under-the-hood changes being made with the Windows 10 Creators Update. Today, the company is discussing the high-DPI scaling improvements that have been made. The changes and additions will be implemented fully when the company rolls out the Creators Update on April 11.

For users who run a desktop application that does not render on high-DPI displays, there is now a solution. Windows 10 Creators Update will run the application as a DPI-unaware process. Essentially, this means users can choose the new functionality in several options, as detailed below:

From those options, System (Enhanced) is a new addition coming with the Creators Update. It allows texts and primitives to render more accurately on high-DPI displays. However, this is only relevant for GDI-based apps. Windows 10 can DPI scale these apps on a per monitor basis.

One of the main issues of DPI scaling on Windows 10 has been the inability to see desktop apps in scale when in extended display mode across multiple displays. Microsoft says Creators Update solves this issue.

DPI Scaling in the Anniversary Update

The Windows 10 Creators Update may finally see Microsoft get DPI scaling right on its platform. I wrote last year that accurately scaling across multiple monitors has been an issue for Windows for years. Despite passing through Windows 7, 8, and 10 in the last decade, the company has still not cracked DPI scaling.

Last year’s Anniversary Update attempted to address the problem. Improvements were made, but still users were still not entirely happy. Hopefully Microsoft is going to please more people with changes in the Creators Update.