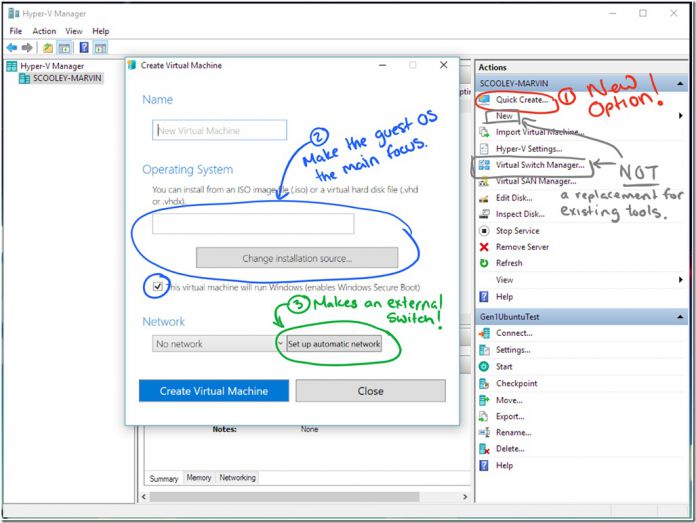 As we reported yesterday, Windows 10 Build 15002 launched on the Fast Ring for Insiders yesterday with a bunch of new features and changes. Microsoft has now expanded the details on one of the changes. Specifically, the updates made to Hyper-V have been detailed in a new blog post.

The focus of the Hyper-V update for Windows 10 Build 15002 is making it simpler for users to create virtual machines. A new “Quick Create” button has been added to Hyper-V (image). This button automatically sets up the PC to an environment for creating virtual machines.

For example, the Quick Create button will set up virtual hardware automatically. A new external switch has also been added for placing internet in VMs.

Continuing the Hyper-V changes, Microsoft has improved the way the service allocates memory. This is important because the service used to fail to use free memory, even if it was sufficient amounts for creating virtual machines.

“With these changes, Hyper-V starts allocating memory in small chunks (to give the operating system a chance to trim memory from other applications) and will use all available memory (no root reserve). Which isn’t to say you’ll never run out of memory but now the amount of memory shown in task manager accurately reflects the amount available for starting virtual machines.”

Despite this, Microsoft has now changed memory limits for customers using the service with device emulators. These users still need at least 200MB more RAM that what the emulator says originally. The company says more information regarding memory management will arrive soon.