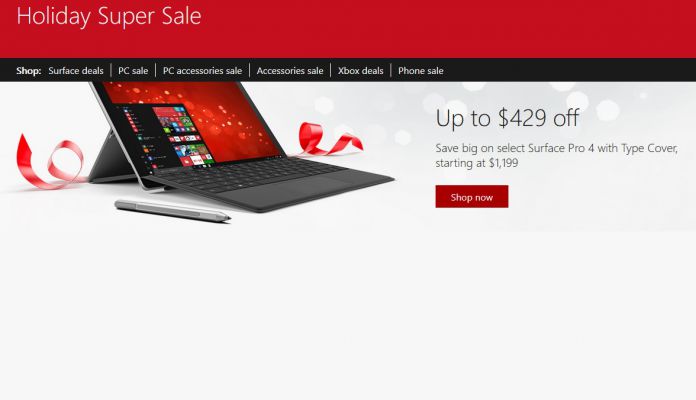 Just a day after ending its 12 Days of Deals promotion, Microsoft has introduced a slew of new offers and discounts. The company’s Holiday Super Sale is now underway and there are savings galore on a number of products. Unfortunately, the Holiday Super Sale is reserved for US customers only.

Among the discounts are Microsoft’s main products like the Surface Book, Surface Pro 4, and Xbox One. The Holiday Super Sale also brings deals on a number of non-Microsoft products. With Christmas just around the corner, this is the perfect time to stock up on the tech presents.

Starting with the Surface Pro 4, there is a sale on the hybrid device. As we reported yesterday, all versions of the Surface Pro 4 aside from the base model have up to $200 off the normal price. This includes the variant with an Intel i5, 4GB RAM and 128GB SSD, which is now $799, down from $999.

Microsoft has also discounts on offer throughout its Surface Book range:

Christmas is a boom period for console sales, so Microsoft is making the Xbox One S more enticing. There is now $50 off both its consoles and bundles. This means the Xbox One S is now available for just $249. Microsoft is also throwing in a free game to sweeten the deal. There is a limited selection of titles to choose from, such as Gears for War 4, FIFA 17, and Minecraft.

Continuing on a gaming theme, there is a 50% discount on a number of major Xbox One games. Some of the offers include Forza Horizon 3, Watch Dogs 2, and Recore for Xbox Play Anywhere.