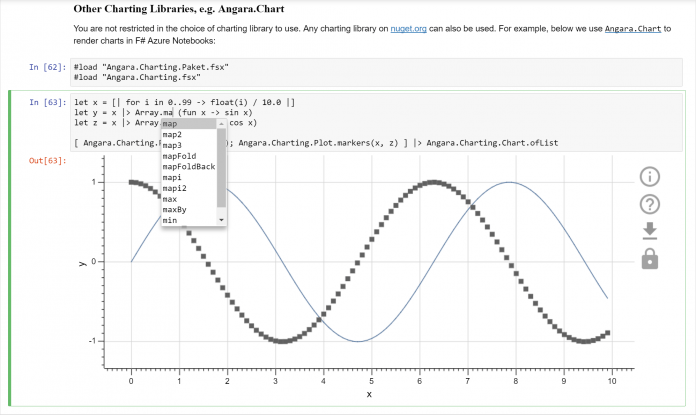 Microsoft has announced that Azure Notebooks now support F# language in preview. This is possible because of the recent availability of the new Data Storage and Data Science workloads in Visual Studio 2017.

In other words, Microsoft says it has customers bases covered. With F# language, free Azure Notebooks have another language alongside R and Python support.

F# is an open source language that works across platforms and is suited for notebook-style programming. It is adept at scripting for notebook level and large-scale programming. F# can be used for web programming, cloud services, and software developments. Microsoft explains how the language works though .NET.

“F# executes as native code through .NET compilation and interoperates with all C# and .NET libraries.  A huge package system of .NET libraries is available through NuGet, many of which are useful as components in analytical services.  Through its indentation-aware syntax and type inference, F# approaches the succinctness and clarity of Python, while remaining a strongly-typed programming language suitable for writing accurate, robust code.”

Microsoft originally launched Azure Notebooks in 2015 as an integration in Azure ML Studio. The company says it is a platform for deploying Machine Learning models. Another example of Microsoft embracing open source, Azure Notebooks are built on Project Jupyter. This toolchain allows customers to create and share documents with visualizations and live code.

Azure Notebooks are free to use and give customers access to data center resources.

“While F# usage is smaller than Python and R, F# brings a unique blend of characteristics to the Cortana Intelligence and Machine Learning toolchain, and can interoperate with these languages either directly or through service implementations.”