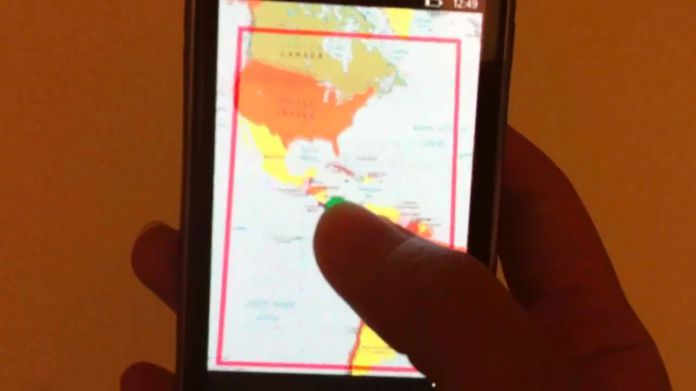 Microsoft Research has published a new video focusing on its efforts to make mobile UI interactions more seamless. While touchscreens are an excellent input method for mobile devices, the current combination with motion can sometime be clunky. Microsoft Research aims to solve this with several touch and motion innovations.

The company give an example of surfing the web while lying down. While the touchscreen is ideal for this practice, motion sometimes makes it frustrating if the screen keeps rotating. Screen rotation can be locked, but the methods are not intuitive. Microsoft says its techniques of a multi-modal touch and motion solution make UI smoother.

For its tests, the company used a Zune HD running Windows Phone 7. Below are the ways in which Microsoft Research combines touch and motion for an improved experience.

Tilt to Zoom – By holding a thumb on the screen and tilting the device at the same time, users can zoom the screen. The rate of tilt dictates how much is zoomed, while an opposite tilt will zoom out. Microsoft points out that this makes zooming a one-handed experience instead of pinch to zoom.

Pivot-to-Lock – As mentioned, automatic screen rotation can be annoying, even if it has its uses. Microsoft Research overcomes this with a simply touch and motion lock solution. Holding down on the screen while pivoting the device will lock the screen in its current orientation. This, again, is a one-handed method for locking the screen.

Microsoft explains how this feature can be expanded to on-screen objects:

“Rotating to a new orientation automatically removes the lock. Alternatively, in some applications, holding the screen while pivoting the device might be used to rotate objects on the screen above the center of rotation indicated by the thumb.”

Hold and Shake – The team has created a prototype photo browser that supports a new delete method. By holding a single photo and shaking the device, users can delete that photo. A second shake would cancel the deletion.

Tip-to-Select – Furthering touch and motion integration for photos, the company shows how users can frame a part of an image with two thumbs and tile the screen to crop that region.

Microsoft says the tile will animate differently, depending on how forcefully the screen is pressed. This is similar to Apple’s screen technology on the iPhone, but Microsoft is expanding the concept and planning on bringing it to all tiles.

It is clear to see that this concept has huge potential. It gives the ability to have a more seamless mobile UI experience, including less touches and more one-handed control. Microsoft has already shown how combining touch and motion can work in its Calendar and Photo apps. However, the press and shake to delete, for example, could be implemented in numerous applications.

One of the most encouraging things about this project is that it is demoed on aging hardware and software. Microsoft Research used an aging Samsung combined and 2009’s Zune 3D with Windows Phone 7. In other words, this technology is good to go on today’s more powerful hardware and software.