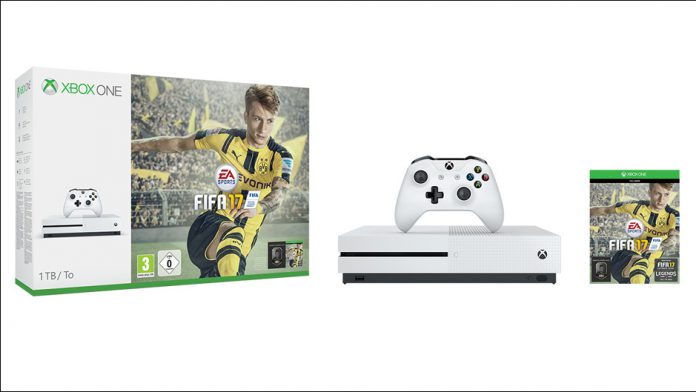 If you have been holding out on buying Microsoft’s new Xbox One S then now may be a time to come on board. The company has now announced a new bundle that will certainly appeal to sports fans. Starting September 22, the Xbox One S will be available with FIFA 17 in the box.

The FIFA franchise is a hugely successful football (soccer) series published by EA. Each year the title is a massive seller, even in the United States where soccer is a minor sport. Microsoft knows bundling the game with the new console is a good way to boost sales.

Speaking of the bundle, the company says the Xbox One and FIFA 17 combination is “packed with everything a soccer enthusiast needs to get ready for the season”. The company adds that the bundles will be available in the USA, UK, Europe, Canada, Australia, and New Zealand.

Interested gamers will find the 500GB bundle priced at $299. This package includes a full-game download of FIFA 17, along with three Ultimate Team Loan Legends and one month of EA Access. The 1TB version will cost $349 with the same bundle and the Ultimate Team Rare Player Pack. The bundles are priced from £249 in the UK.

Another perk for customers who buy a bundle is early access to FIFA 17. Gamers who buy the title with the Xbox One S can play it five days before its launch. EA says gamers on the old Xbox One with EA Access will also get this luxury.

Microsoft started shipping the Xbox One S on August 2. The early run of the console has included a 2TB version, which is now almost sold out. The Xbox One S is 40% smaller than the original version. It also includes upgrade like Bluetooth support, and improved controller, and 4K support.