Microsoft has been telling users for a while now that their OneDrive storage will be downgraded. This week, they have been sending out further emails to tell users to take immediate action.

Though the downgrade was initially planned for July 13th, the new email suggests that users now won’t see the changes until July 27th. The action first came in 2014 when the company sent out a notice that an opt-in was required to keep the current 15GB.

Users who didn’t sign up will now be reduced to 5GB and the 15GB camera roll bonus for Windows Phone users will also be removed, meaning a loss of 25GB for some.

To remedy this, Microsoft has offered a free, one-year Office 365 subscription. This plan comes with 1TB of drive storage, which should be plenty for most users. If this isn’t possible them they recommend buying extra storage. 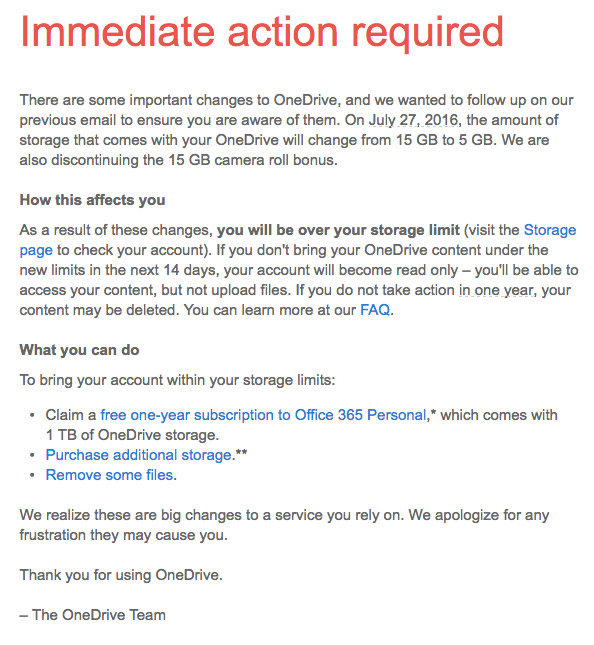 If you can’t afford extra storage and have more than 5GB stored, Microsoft recommends moving some of your files before the deadline. If you fail to do so, your OneDrive account will become read-only. Leave it for more than a year and your files may be deleted.

The move is still a strange one on Microsoft’s part, as they are likely to lose customers to Google Drive as a result. Their competitor offers 15GB of storage for free and has not announced any plans to downgrade.

Perhaps they are hoping the hassle of switching providers will be enough of an incentive to upgrade to a paid plan? Whatever the case, we will keep you updated on events as they unfold.