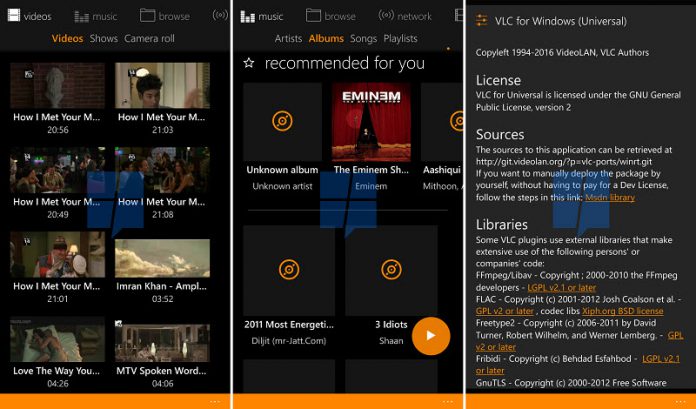 Back in April, VideoLAN announced the UWP version of its VLC media player for Windows 10. The cross-platform service is rumored to be available on Windows 10 PC, Windows 10 Mobile, HoloLens, and the HoloLens augmented reality headset. It went into closed beta a few weeks ago, and now first images of the  Windows 10 Mobile versions have appeared online.

As revealed by screenshots from MSPU, the VLC UWP app looks much better than the public version available on Windows Store. The app brings a major UI overhaul and aligns perfectly with Microsoft’s design language used for Windows 10 Mobile an its whole Windows 10 ecosystem.

As for features, the VLC UWP app brings a bunch of additions such as UPnP and network share browsing, HTTPS and adaptive streaming, support for dialogues, better hardware decoding, and a lot more. The mobile version of the app will be able to support and play a large number of media formats, file types, and codecs.

However, it is important to note that the app is buggy and unstable as it is still in closed beta. The stable version is expected to roll out soon, but no official launch date is known so far.

The most likely scenario will be a release alongside the Windows 10 Anniversary Update this summer. We’ll let you know when the app is available for download on theWindows Store.