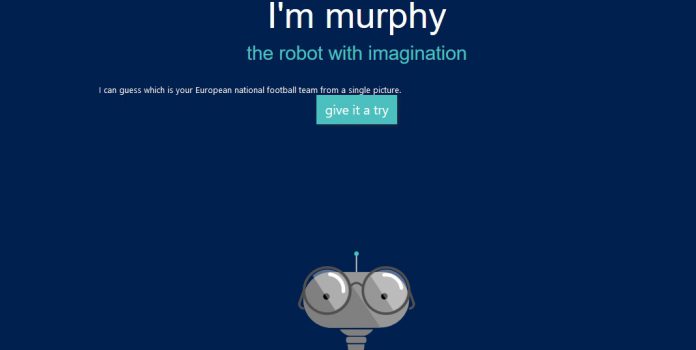 Murphy is a Microsoft bot that can detect details (faces) in an image, identify who the subject is and guess feelings, age, and add captions. Microsoft says that its AI can successfully guess which football team you support at the upcoming Euro 2016 tournament, which gets underway today.

Microsoft has been talking a lot about bots this year. At Build, the company announced bots for Skype, which is when Murphy made its debut. The Bing Concierge Bot was announced at Build too, showing the ability to put words to images, albeit rather hilariously when it came to Microsoft CEO Satya Nadella.

Just recently Microsoft Research has shown its advancements in AI that can read images and put conversational image and video to text bridges to explain the content.

Murphy is another example of the company’s Cognitive Services computer learning AI and is dubbed the “robot with imagination”. If imagination means getting the national team I support (am from) wrong, then Murphy is indeed imaginative.

Yes, a few attempts and different images failed to get the correct results. I uploaded the image you see above (and in my profile) into Murphy, and her first guess was that I am Irish. I am actually Welsh, so I gave the bot a “pretty close” response only for it to go off on a tangent saying I was Russian or possible from the Czech Republic.