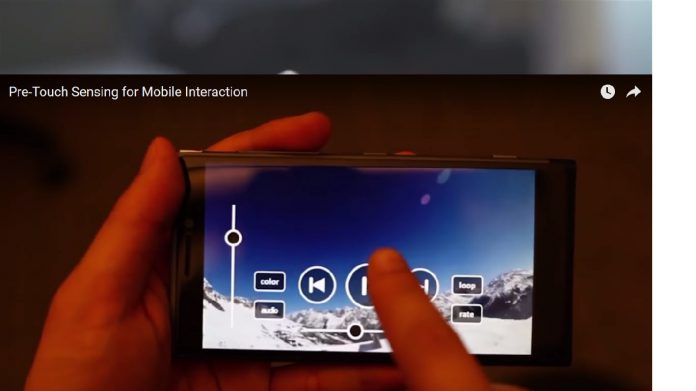 A new video from Microsoft Research demos a Hover Gesture feature that lets smartphone users control a device without touching the screen.

While many argue that smartphone technology has hit an innovation wall, leading companies in the industry would disagree. Brands are figuring out new ways to interact with handsets, such as Apple’s 3D Touch, which allows the screen to read pressure sensitive touches. Microsoft Research is going one better with its new hover gestures, or as the company calls it, “pre-touch sensing for mobile interaction.”

In its simplest form, this feature allows users to navigate a device, select items, interact with apps and see content by simply moving a finger over the screen, but without the need to touch it. Hovering just above the screen accomplishes what would normally be done with a touch.

Of course, Microsoft Research is not necessarily the first to achieve this kind of functionality, both Sony and Samsung has dabbled in the tech but never substantially. Microsoft’s work is much more complete and lets users entirely navigate a device with a hover gesture, meaning less touches and hopefully a more streamlined user experience.

The company has worked on gesture control before, using its Kinect motion sensor technology on a 2014 Windows Phone device that was never announced. The new feature is much more nuanced than that or anything revealed by rival companies so far, allowing more intricate interaction.

For example, while playing back media users can hover a finger over the screen to bring up the playback controls, while even more control is possible such as texting and highlighting for copy and paste commands.

It is worth remembering that this is a Microsoft Research project, so it is not ready to go on a real smartphone just yet, and indeed there is no guarantee that this feature will ever see the light of day. Considering its functionality and near completeness though, we would think that Microsoft is definitely planning to roll out hover gestures at some point.