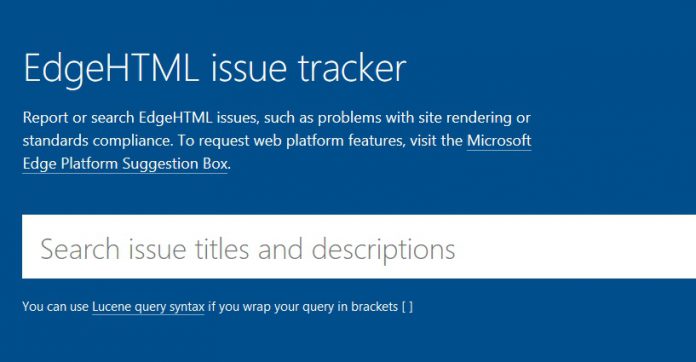 Microsoft opened its second annual Edge Web Summit in San Francisco on Monday and the 2016 event started with that company unveiling a new issue tracker.

At the start of the event, Microsoft discussed how it wants to change and improve the ways in which its new Edge browser interacts with users and the community.

The issue tracker will give users an easy feedback option which can then be analyzed by Microsoft engineers to find consistencies in issues found.

Microsoft says the system will allow engineers to have a better picture of problems in Edge, while the company says it can listen better with an issue tracker.

Instead of building off an existing issue reporting system (the company has several across its services), Microsoft decided to build the Edge issue tracker from the ground up. It is integrated into the Edge engineers’ workflow.

Users are able to use the tool to report problems they encounter, but they will also be able to search for Edge HTML issues, while Microsoft will keep Edge users informed with replies from engineering in what the company describes as “transparent progress”.

“Internet-scale data is a powerful tool to understand what properties are important to the real web, and what APIs are interoperable across browsers. Now you can access the same data we use to plan the future of the web platform and use it to inform your own development.”