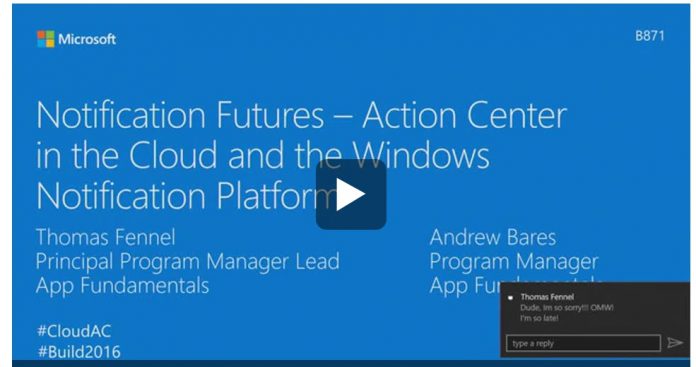 Action Center in the Cloud was announced by Microsoft at Build 2016 on Thursday, debuting a number of features in the process.

Announcements abounded at Build 2016 this year, and on a busy day of Azure and cloud talk, Microsoft also dropped an Action Center for the Cloud.

The company is really beefing up its notification features for its cloud services, allowing users to share notifications across devices on their Microsoft accounts.

Action Center in the Cloud is a solid idea even on the surface, but Microsoft has wisely packed the new service with a bunch of features.

It really is an enviable list of features that builds on the company’s previous efforts to give Cortana the ability to alert you of mobile notifications on your PC.

Universal Dismiss is one of the new features found in Action Center in the Cloud, allowing users to dismiss notifications across an account on either mobile or PC, providing both share the same app. Notification Mirroring gives the ability to show phone notifications on a PC through the same account, even if an app is not shared.

Microsoft said some of the features will be coming to Windows 10 Mobile and Cortana will deliver them to the Android platform in the future. Windows 10 Insiders will be able to get the features first in an upcoming release, with the Preview Build 14304.

Universal Dismiss will be exclusive to Windows 10 Mobile for now, while none of the features are planned for iOS at the moment. In a week where Microsoft has become closer to Apple’s OS at Build, the company says the closed nature of iOS means Action Center in the Cloud is harder to integrate into Apple’s platform.

Microsoft has also spruced up the general UI for Action Center, giving the feature more room for content and adding such things as multimedia content and profile picture. The company is even saying it is thinking of adding widgets to Action Center.