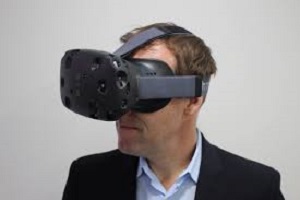 A new Kinect experiment adds a new twist to virtual reality, allowing the user to see a virtual representation of themselves in three-dimensional space.

This is an exciting development in the realm of VR gaming. Currently, HTC Vive games display representations of other players, but not the user.

Dutch developers Jasper Brekelmans and Jeroen de Mooij used the Kinect Sensor to track the bodies of two users in 3D space, then aligning the data with Vive’s positional tracking to display an image of the user.

While there are hardware and possible bandwidth limitations to this experiment — both users would need the same Vive and Kinect setup, for example — this may prove to be a boon to Vive in the upcoming VR headset clash with Oculus Rift.

HTC’s Vive headset will be available on April 5 (preorders began Feb. 29), while Oculus Rift is expected to being shipping in late March. Oculus Rift is cheaper ($599, to $799 for Vive) and while both are compatible with PC, Oculus Rift has the edge of being out-of-the-box compatible with Xbox One, allowing for streaming of Xbox games directly to the headset.

The Vive experiment in the above video was conducted with two Vive headsets and controllers, two PCs, a Kinect for Xbox One sensor and a laptop PC, all running on a local area network, according to Microsoft.

“But the developers point out that the same process could be used via the Internet, provided that both users use the exact same setup of HTC Vive components and Kinect sensors. And, as Brekelmans happily notes, ‘we managed to keep the data bandwidth to about 4 to 5 megabits per second, which took quite a bit of sweat.'”

Sony’s VR headset for the PlayStation 4 is expected to launch in the first half of 2016, providing further competition in the growing VR gaming market.