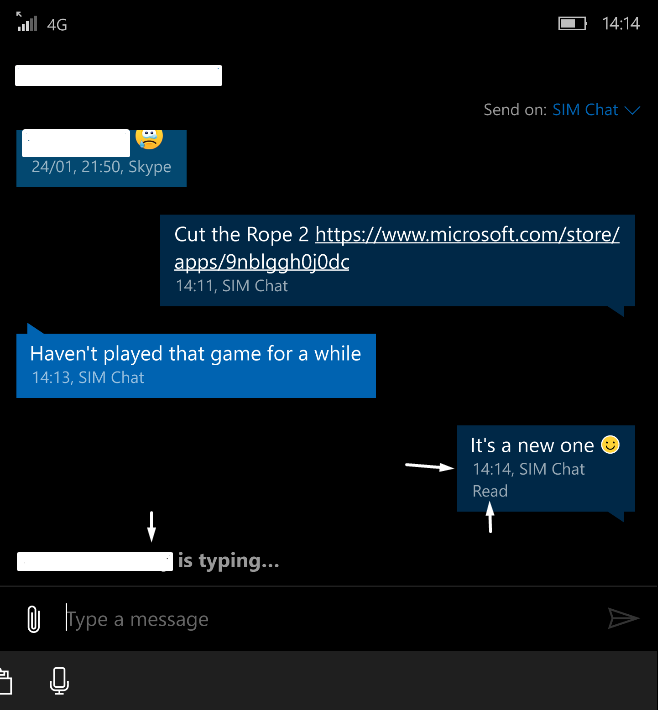 RCS and Advanced Messaging systems are supported by the Windows 10 Messaging app on compatible carriers such as Vodafone UK.

As Windows Mobile 10 users await the scheduled software update for Lumia 950 / 950 XL and Lumia 550, there are some features of Windows 10 that are still being discovered by the users.

This is not different in the case of the RCS (Rich Chat Services) powered Windows 10 Messaging app, which has now been made public on the GMRtec blog.

Rich Chat Services it is a network protocol offers notification details that are commonly found in instant messaging apps such as WhatsApp and iMessage. This includes details about whether the contact has read the sent message or if he is currently typing a new message.

The RCS powered SMS feature was officially announced at a Windows 10 Briefing event one year ago, where Joe Belfiore explained that they are “building in support to the messaging app so that IP-based messaging systems like the ones that mobile operators are rolling out and Skype can be elegantly integrated right into messaging.”

The RCS service has existed in the Windows 10 Messaging app for several months, but is only usable with carriers, such as Vodafone UK, that support such functionality. However, the RCS feature is not limited to Windows 10 Mobile users, since Windows Phone 8.1 users can download Microsoft Messaging+ app to enjoy the similar options.