Microsoft has announced the release of Open Live Writer a forked and open source version of its discontinued blogging tool Windows Live Writer The project was realized by an independent group of volunteers within Microsoft.

After months of exerting effort, Microsoft along with .NET foundation has now officially made Windows Live Writer open source on Git Hub. The software is now called Open Live Writer (OLW) and has been contributed to the .NET Foundation where it is managed and coded by volunteers.

Scott Hanselman, Principal Program Manager at Microsoft encourages users to try out the initial version 0.5 and to report any bugs encountered via GitHub. Like Hanselman pointed out on an earlier note on his blog, a big part of the code in OLW is nearly a decade old.

“The coding conventions, styles and idioms are circa .NET 1.0 and .NET 1.1. You may find the code unusual or unfamiliar, so keep that in mind when commenting and discussing the code.”

Previous features from Windows Live Writer have been modified and spell Checking, the “Albums” feature and the  Blog This API are not there anymore. On the other hand OLW is planned to support Google’s Blogger platform in the future.

Windows Live Writer 2012 was the last version Microsoft released and can still be downloaded from http://www.windowslivewriter.com. 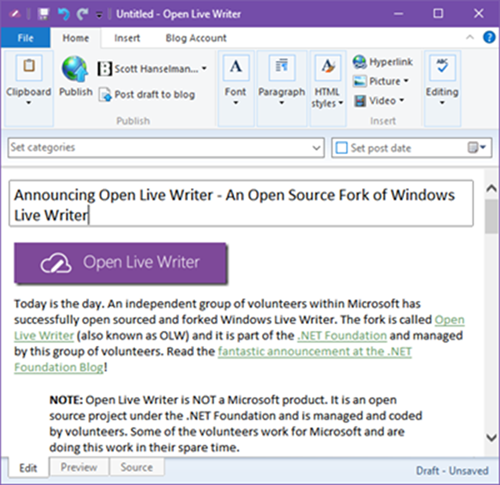 The .NET Foundation has stated that they wanted to release OLW as an open source project as fast as possible to attract collaborators also from outside Microsoft. Microsoft’s team of volunteers considers the .NET foundation as a great partner for active community participation.

This year, Microsoft has been making a lot of moves to connect with the developer community by open sourcing some of their programs. Just this month, Microsoft has announced that they had open sourced JavaScript engine of Edge browser and called the project ChakraCore.