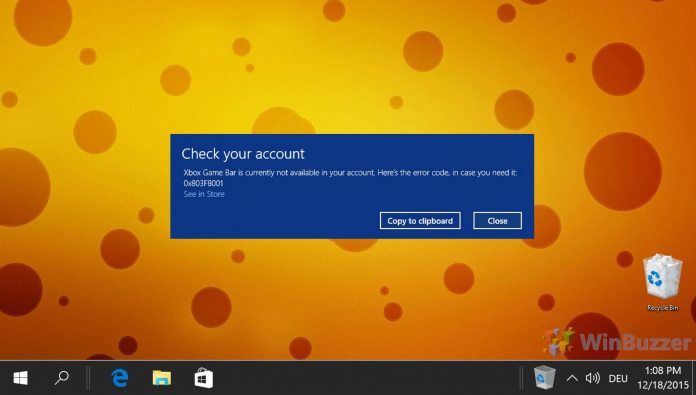 Microsoft’s Xbox Game Bar for Windows 10 has become an increasingly useful tool during 2020. The company has done a lot to ensure the feature is more functional than before. However, today users are not getting that functionality because the Game Bar is crashing. If you want to fix the problem quickly, we’ll show you how below.

Chatter on Reddit and other forums this morning suggests there is a problem with the Xbox Game Bar. Specifically, users are finding the bar is crashing with error codes and the following message:

“Xbox Game Bar is currently not available in your account. Make sure you are signed in to the Store and try again. Here’s the error code, in case you need it: 0x803F8001.”

Running our own checks, we found the Xbox Game Bar is indeed crashing and not working properly. It seems the problem is a server-side issue coming from a change Microsoft made on November 5. Some users are experiencing persistent problems because of this change.

“I have no idea what’s going on here and it’s really annoying me that Game Bar isn’t working. It was just fine yesterday,” one Redditor says.

Another user points out the issue is clearly from Microsoft because it is happening globally:

“Judging that all our problems have happened in the last few hours I bet it’s a Microsoft issue, because I’m getting the same issue starting a few hours ago.”

How to Fix the Crashing Game Bar

While this problem may make the Game Bar seem unusable, it only needs to be a frustration. That’s because there is an easy enough fix to get rid of Error 0x803F8001 by uninstalling Xbox Game Bar.

Later you might re-install it to reflect Microsoft’s server changes. This might not work immediately and you probably need to live without Xbox Game Bar for a few days. But any other server-side issue should be fixed by Microsoft pretty soon. If Error 0x803F8001 comes back, you can wait a bit longer and try re-installing Xbox Game Bar at a later point.

We have recently published this tutorial (How to Completely Uninstall the Xbox Game Bar) showing you exactly how to do just that. Our guide shows you how to install the Game Bar through PowerShell but also how to easily reinstall it.

If you follow our tutorial you will be able to have the Xbox Game Bar working again until Microsoft rolls out is own fix via an app update.