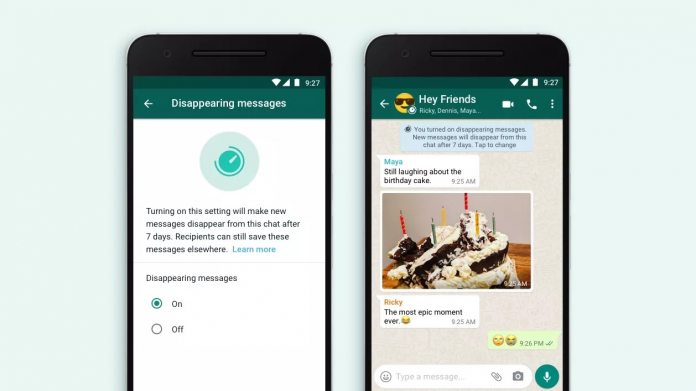 WhatsApp is now rolling out one of the most anticipated features amongst users. The Facebook-owned company says disappearing messages are now reach all users. It has been a long road since the chat app first announced this tool earlier this year.

At the time, WhatsApp said disappearing or self-destructing messages will only come to group chats. Later, the company changed its mind and confirmed it will also come to individual users. However, no timeframe for the launch of the feature was given.

It has been months, but users are finally getting the tool. The disappearing message option allows users to set a timer on to decide how long a message remains visible in the chat. Once the time elapses the message is deleted.

Users have complete control over the feature and can choose to disable it. Options include setting the self-destruct to 1 hour, 1 day, 1 week, 1 month, and 1 year. This chosen length of time will determine how long WhatsApp keeps a message in a conversation.

When the time limit is chosen, the app displays a clock icon next to the sent time on a message. WhatsApp will also deliver a notification when the message is deleted.

In a blog post, WhatsApp explains the steps for using the feature:

Like the new storage options released this week, WhatsApp is rolling the new feature in stage. The company says all users will have it sometime during this month.