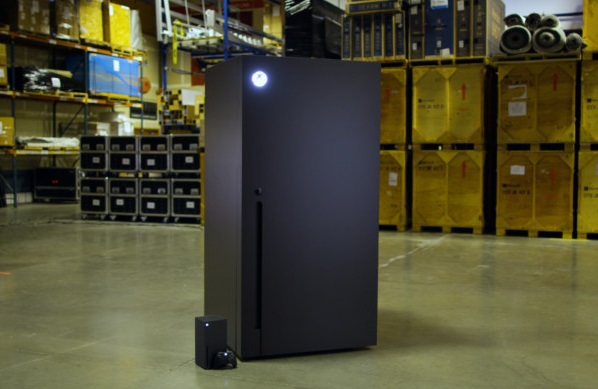 Microsoft is expanding its product output and entering the world of home appliances. If you have ever wanted an Xbox fridge… you will have to keep waiting. Today, Microsoft has sent out the “world premiere” trailer for the Xbox Series X fridge, bowing to the meme culture around the new console.

Of course, this “World Premiere” is a promotional ad for the upcoming Xbox Series X. Yes, put your money away, this is not a fridge customers can buy. Some memes have suggested the upcoming Series X is big enough to be a fridge.

Microsoft clearly decided to play along and issued a video showing off the fridge. Yes, it is essentially a 1:1 scale replica of the Series X consoles that weighs over 400 pounds and six feet tall. Microsoft even plays on the tech inside the new console buy saying the fridge boasts “next-gen cooling.”

Furthermore, Microsoft says the fridge costs $499, which is the same price as the Series X.

While this is a promotional item not to be sold, it is a real fridge. Microsoft sent one to long-time Xbox fan Snoop Dogg and is to a lucky winner. The winner will be announced on November 6.

Follow and retweet with #XSXFridgeSweeps for a chance to win the Xbox Series X Fridge.

Microsoft is just weeks away from debuting the Xbox Series X and Xbox Series S to customers.