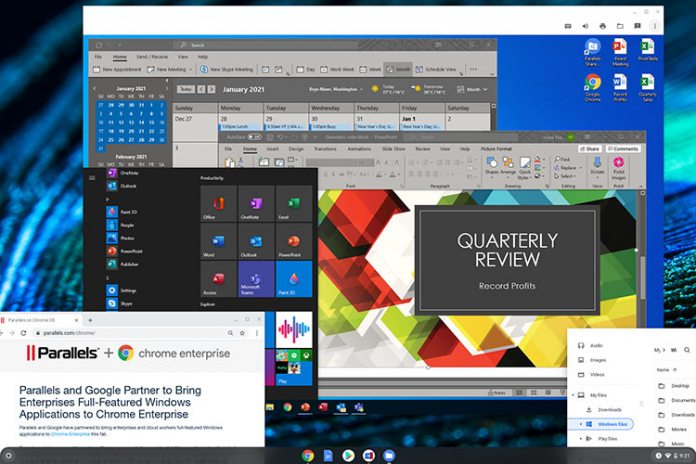 Google has made an announcement that could overcome one of the biggest compromises on its Chrome OS platform. The company is collaborated with Parallels to bring Windows programs and applications to Chromebooks.

Both companies have been developing the service since earlier this year. At the time, we reported on the effort to boost Chrome OS in enterprise, an area where Microsoft’s Windows remains a dominant leader.

Parallels is known for providing apps in virtualization, like its “Desktop” app that allows Windows 10 to run on MacBook. However, the Parallels services goes beyond mere emulation. Instead, the company creates a full OS, which is Windows 10, that sits on top of Chrome OS and runs alongside it.

In many ways, this is the dual-boot idea Google was toying with, albeit coming from a third-party partner. To facilitate a Windows experience through Parallels, Google created a container sandbox for the OS to run.

While partitioned from Chrome OS, the Windows 10 sandbox does integrate with it. For example, users can share, copy, edit, and paste files between the two operating systems. This all looks amazing on paper, but there is a significant caveat.

Not All It Seems

I mentioned the idea of functioning Windows apps on Chromebook is born from Google playing catch up in enterprise. As such, the Parallels service is only available for the Chromebook Enterprise and Chromebook for Education programs. Could this change in the future? Sure, but Google is making no predictions. Another piece of information worth knowing about is customers will still need to have a full Windows 10 license.

Aside from those not so minor details, this is clearly a major step forward for Chrome OS. Certainly, the change appeals directly to businesses who may want Google’s platform but are unwilling to give up the desktop programs Windows allows.

Although, it is worth noting a lot of enterprise and education Chromebooks won’t be able to access Parallels. Simply put, many Chromebook devices are not powerful enough to run Windows. Google and Parallels recommend the minimum specs should be an Intel Core i5 or Core i7 processer, 16GB of RAM, and 128GB of storage.

If you are familiar with Chromebooks, you will know from the dozens of available models only a select few boast that kind of hardware. In fact, the official list of supported devices is small, and includes: