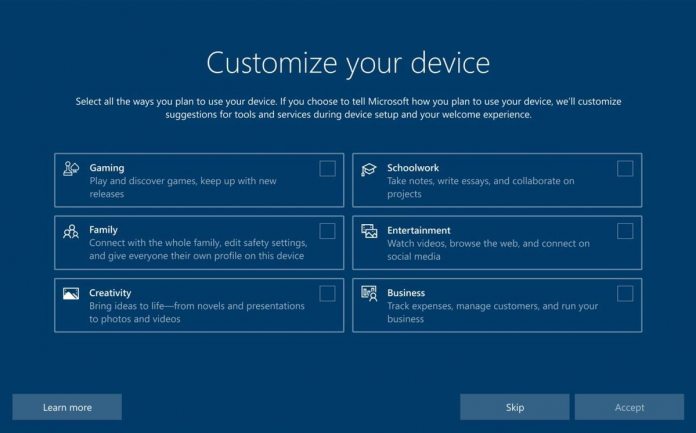 Yesterday, we reported on Microsoft testing a new Out of the Box Experience (OOBE) in a new Windows 10 preview. However, it seems the company has more plans for the Windows set up process. According to a report, the company will take a Windows 10X solution and extend it across the platform.

Twitter user and Microsoft-watcher, Albacore, reports a new UI experience will come to the OOBE. This experience comes from Windows 10X, the company’s lightweight and modular version of Win10.

When Windows 10X launches in the coming months, it will obviously take plenty of inspiration from the normal variant. However, standard Windows 10 will also borrow form 10X. This UI change for the initial setup is one example.

Options for customization and configuration are now on a white background, reflecting the more modern look of Windows 10X. It’s a subtle change that Microsoft does not discuss in its latest Windows preview release notes.

The Windows 10X OOBE is coming to desktop! Here's a video of it in action in build 20231. pic.twitter.com/jZXVZT62qj

In the video posted on Twitter, the new OOBE is seen in action running the UI tweak. As this is still in preview and Microsoft has not officially talked about it, there’s a chance the UI will revert to the standard Windows 10 design at some point.

We’ll find out next year when Windows 10 21H1 launches.

Regarding the new Out of the Box Experience, Microsoft is expanding the number of custom options. Users will now see the following items: