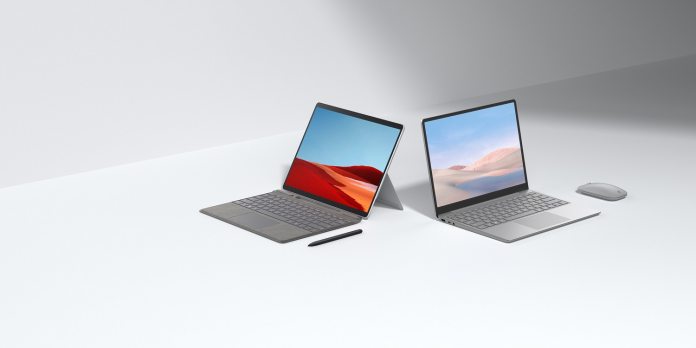 When Microsoft has a Surface product in the pipeline, we usually know all about it long before the device is announced. Leak and rumor culture all but guarantee no product launches by surprise. Erm, it seems we can throw that idea out because Microsoft has today dropped the Surface Laptop Go.

This is a new product that comes as a complete surprise. There has been no buzz or information about this product… making it a rare drop the mic moment. Sure, it would be more seismic if its was a smartphone or other “cooler” product, but still.

So, what does that mean in terms of performance, hardware, and specs? Well, the first thing worth noting is a $549 laptop is near the mid-range. Certainly, most casual laptop owners will not be packing a $1,000+ laptop. With that in mind, the Surface Laptop Go will still need to be a solid machine for the price.

On paper, it’s not good news. Firstly, it has a 12.4-inch 1536×1024 display, which is smaller than the 13-inch or 15-inch Laptop 3 options. Yes, that’s less than 1080p, which should be a standard on a $500 laptop these days. While the resolution may be a concern, Microsoft is known for building stellar screens, so don’t write off the Laptop Go just yet.

On the hardware side, the device gets the usual slick Surface aesthetic we are accustomed to. It also gets a full-sized keyboard despite its compact size, with 1.3mm of travel. As you might expect, the CPU is firmly in the mid-range. It is an Intel Ice Lake Core i5-1035G1 that will handle most normal-use tasks with ease. It’s the same story with the 4GB of RAM available, it will get the job done but is hardly amazing.

Users won’t be using the Surface Laptop Go for gaming because its G1 Ice Lake GPU is simply not up to the task. As with all Surface devices, there is no option to expand on a machine you own, so what you buy is what you get.

As for configurable options, the laptop provides just 64GB of storage, and it’s only eMMC storage. Once all the OS and other built-in software is out of the way, you’ll be left with around 50GB of space. I get Microsoft is going the Apple route and trying to push users to the cloud, but this is a scant amount of native storage at a price point where many laptops will offer at least a 250GB SSD.

It’s worth noting there is a $700 version of the Go, which bumps the storage to 128GB on an SSD, but RAM and processor configurations remain the same. Looking at this more expensive model, it gets dangerously close to the $899 entry level Surface Laptop 3. There’s no doubt there is a huge gap in quality over that 200 bucks.

It’s clear there are better laptops on the market in the $500 to $600 range. With that in mind, it is hard to see who the new Surface Laptop Go is for. Maybe users who simply want a Microsoft Surface device but don’t have a large budget. But even then, the normal Surface Go is probably a better bet. Looking over the new device, it’s easy to see why Microsoft announced it quietly.