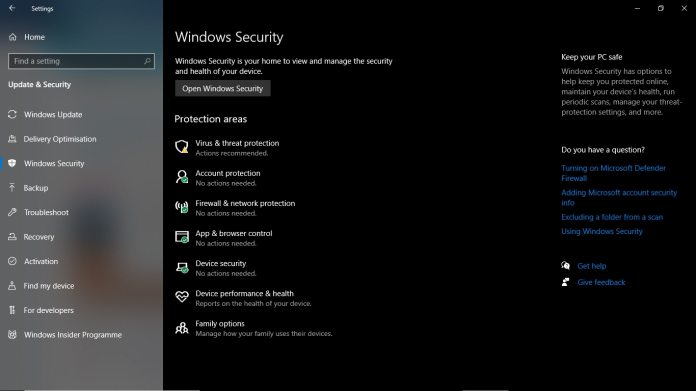 Many Windows 10 users like to block the platform’s capabilities for gathering data through telemetry. This is something Microsoft does on the basis of improving the platform, although the practice does not sit will with some users. It now seems Microsoft Defender actively warns users about blocking telemetry data.

Telemetry data is information on the system that on Windows 10 is gathered by Microsoft as part of the Connected User Experience. The platform is connected to Microsoft, allowing information about the device to be sent to the company.

With this information, Microsoft can see hardware specifics of the machine, including storage, memory, CPU, and configuration. All telemetry data is fully encrypted, and Microsoft says it uses the information to improve security and performance on Windows 10.

There’s a couple of things worth knowing about telemetry. Firstly, gathering telemetry data is not something exclusive to Microsoft. Most tech companies do it because it helps to improve the development of software. Secondly, there is no way to disable telemetry data collection in Windows 10, although users can delete any diagnostics data the platform collects.

Users could work around this limitation by editing the HOSTS file in Windows. This is the file that helps the network name map for IP addresses. Users could edit it to block Microsoft from gathering telemetry data.

At least that was possible until recently. Microsoft has sent out an update for Microsoft Defender (previously Windows Defender) that warns users about making such edits. Whenever a user tries to edit HOSTS, Defender returns a security warning and the user cannot save the edit.

A possible solution is using third-party software to stop Windows 10 telemetry services from collecting your data. One example is Outbyte PC Repair which allows users to turn off collecting of your data by Windows.