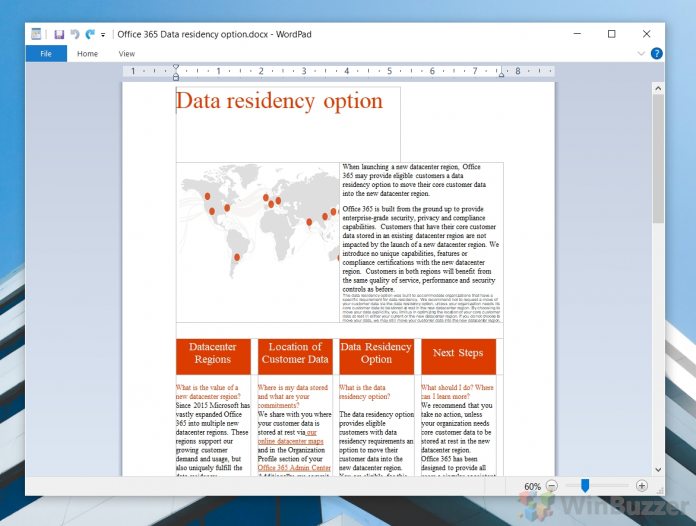 Microsoft Word and its Word Document formats work great if you’re inside the company’s ecosystem, but what if you’re using a PC without its $70/year Microsoft suite installed? Things start to get a bit trickier as the company naturally wants you to make use of its productivity services.

Though Microsoft provided a free ‘Word Viewer’ application up until 2017, recommending various other official routes to access its applications instead. With a lot of confusion about which paths are free and which will cost you, many are still left wondering how to open a Word document without Microsoft Word.

We’ve rounded up and tested some of the best ways to open Word docs in 2020, whether it’s online, via Microsoft software, or a third-party application.

Open a DOCX File with Wordpad

In Winbuzzer’s testing, the fastest method was Windows’ in-built WordPad. Though our test document did see some distortion in image and text box width and switched to a serif font, it did the job well enough to be easily legible. 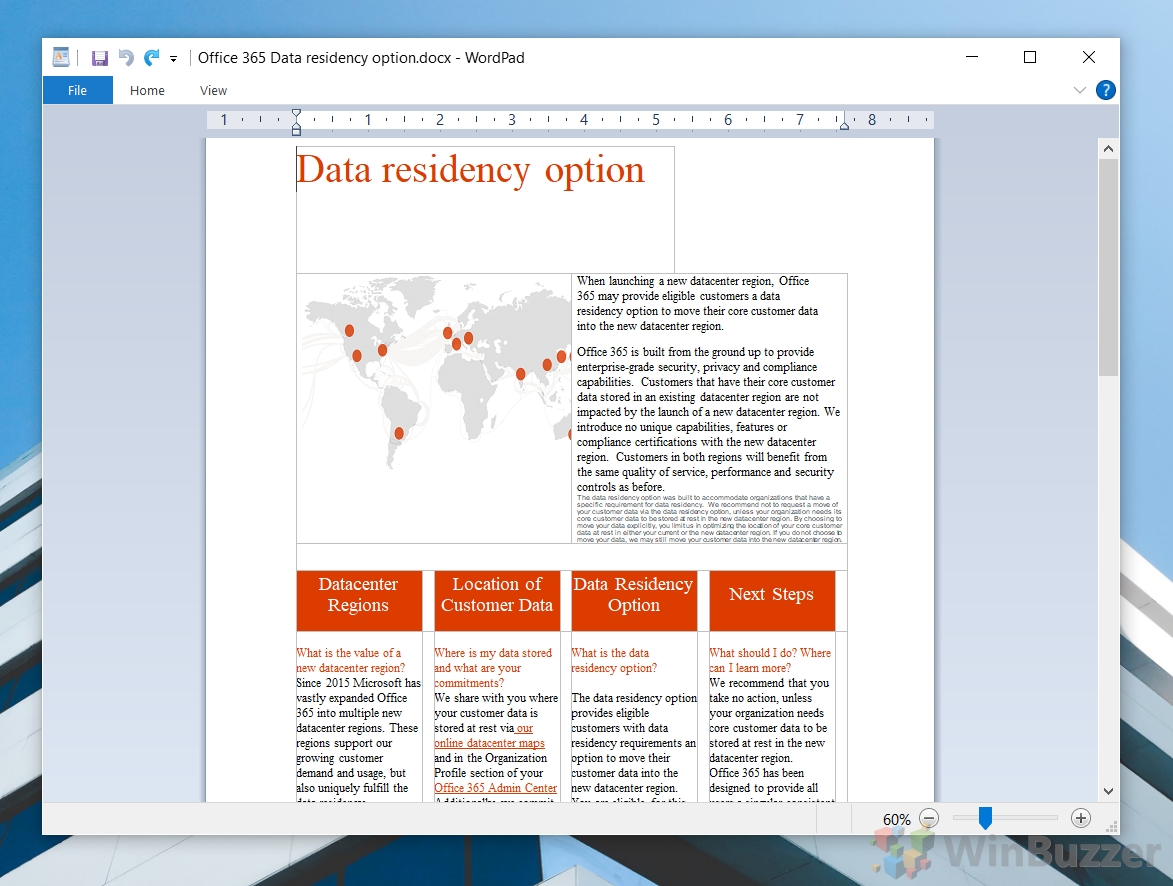 If you’re editing a Microsoft Word Document or it’s important that it stays in its original form, this isn’t the best solution, but it’s a quick and useful trick if you’re in a hurry. Naturally, this also isn’t an option on macOS, mobile, or Chromebooks.

Open a Microsoft Word Document with the Word Mobile App

Microsoft recommended its Word Mobile app as a replacement for Microsoft Word Viewer, and it’s easy to see why. Despite the ‘Mobile’ nomenclature, anyone on PC can grab it from the Microsoft Store free of charge, without an Office 365 subscription. 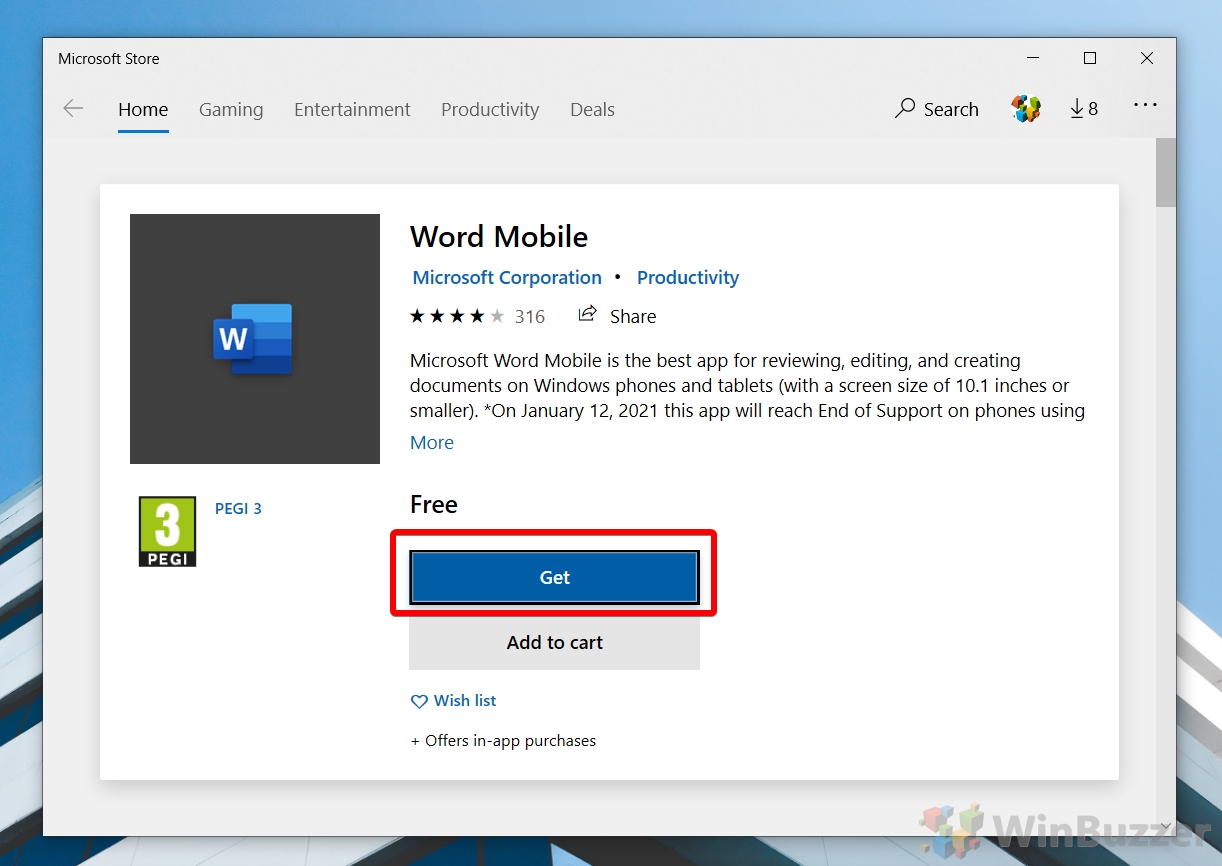 Though the Word Mobile app is designed for tablets, it can still be run in regular Windows 10 and provides good results. As you’d expect from a first-party Microsoft app, there are no formatting issues here and that’s consistent across various layout types.

The main caveat with Microsoft Word Mobile, then, comes with editing. The solution only opens Word documents unless you have a subscription, meaning you’ll be unable to make a quick change and send it back to someone. As a Microsoft Store app, it’s also naturally limited to Windows 10 PCs and tablets.

If you’re happy to open DOCX online, Microsoft’s Word Online is the natural place to go. Though you will need a Microsoft account, you can press “Upload and open…” on the homepage to quickly get your Word document online. It’s an extra step if you’ve already downloaded the file, but those who open Word docs regularly enough for it be an annoyance probably already own the Office suite. 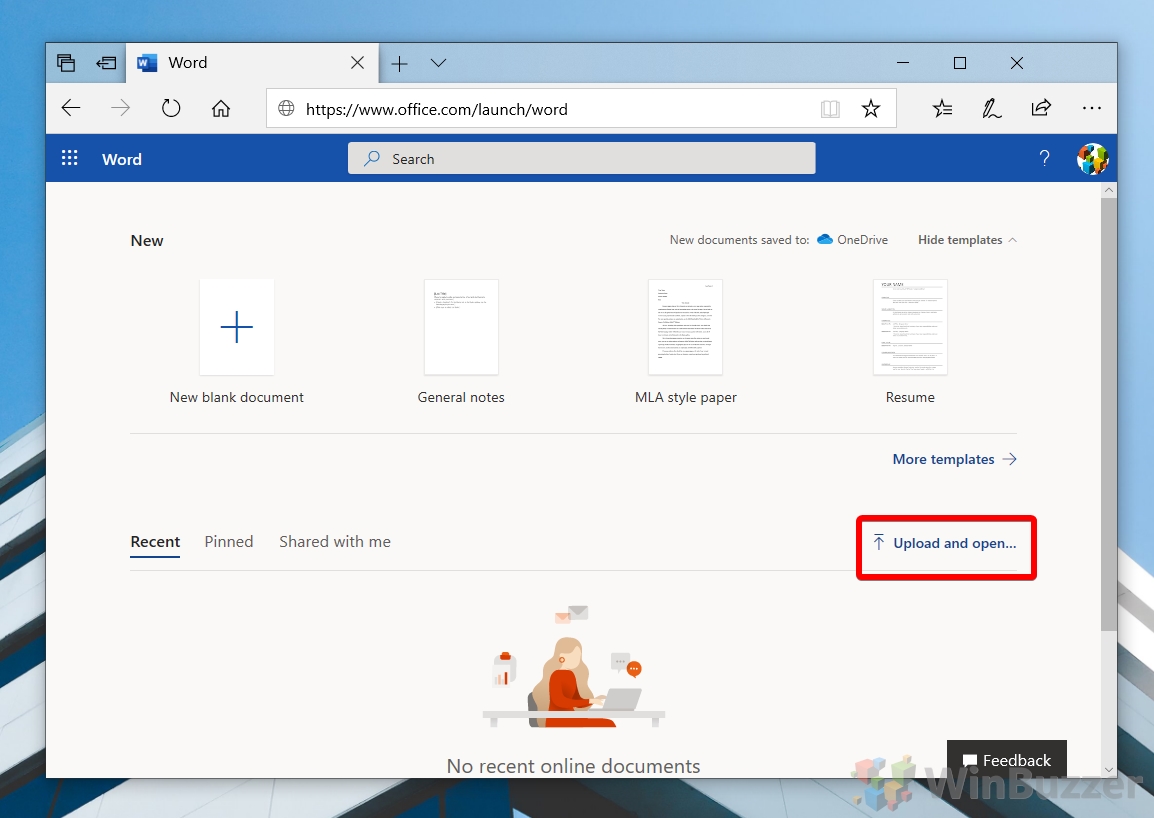 Word Online produced very favorable results in our testing, as you’d expect from Microsoft’s official web service. It comes without the annoyance of being designed for tablets and even offers basic editing functionality. The natural advantage of the web-based app is that you can access it from any device. Linux, MacOS, and Chromebooks all have the same experience and works flawlessly, but you will require an internet connection. 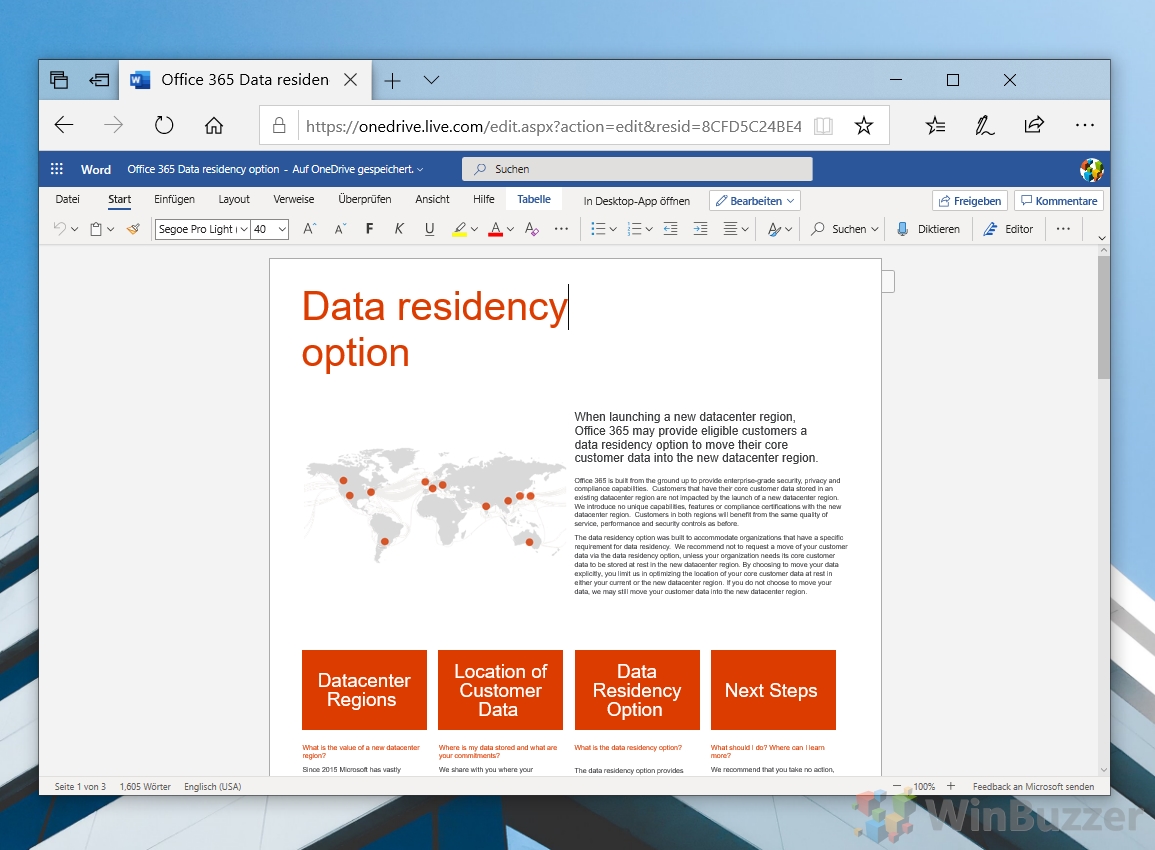 Though it does mean you’ll have to use your browser rather than a dedicated application, the new Chromium Microsoft Edge browser allows you to install web pages progressive web apps. 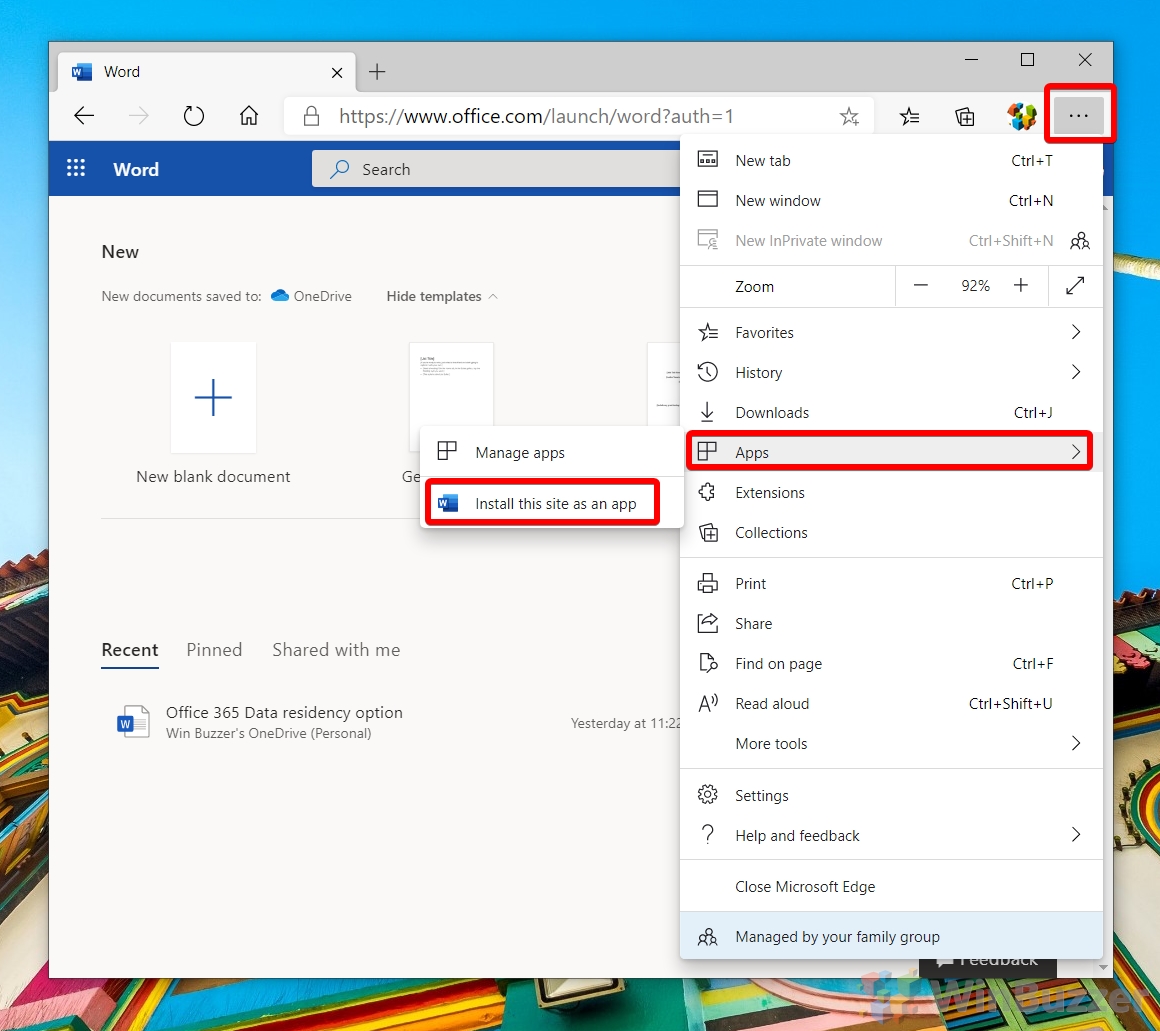 This will create an Office app with the exact same functionality and will allow you to launch it from your taskbar or Start menu into its own Window at any time. Similar techniques can be utilized in Google Chrome via the ‘Create as shortcut’ option. 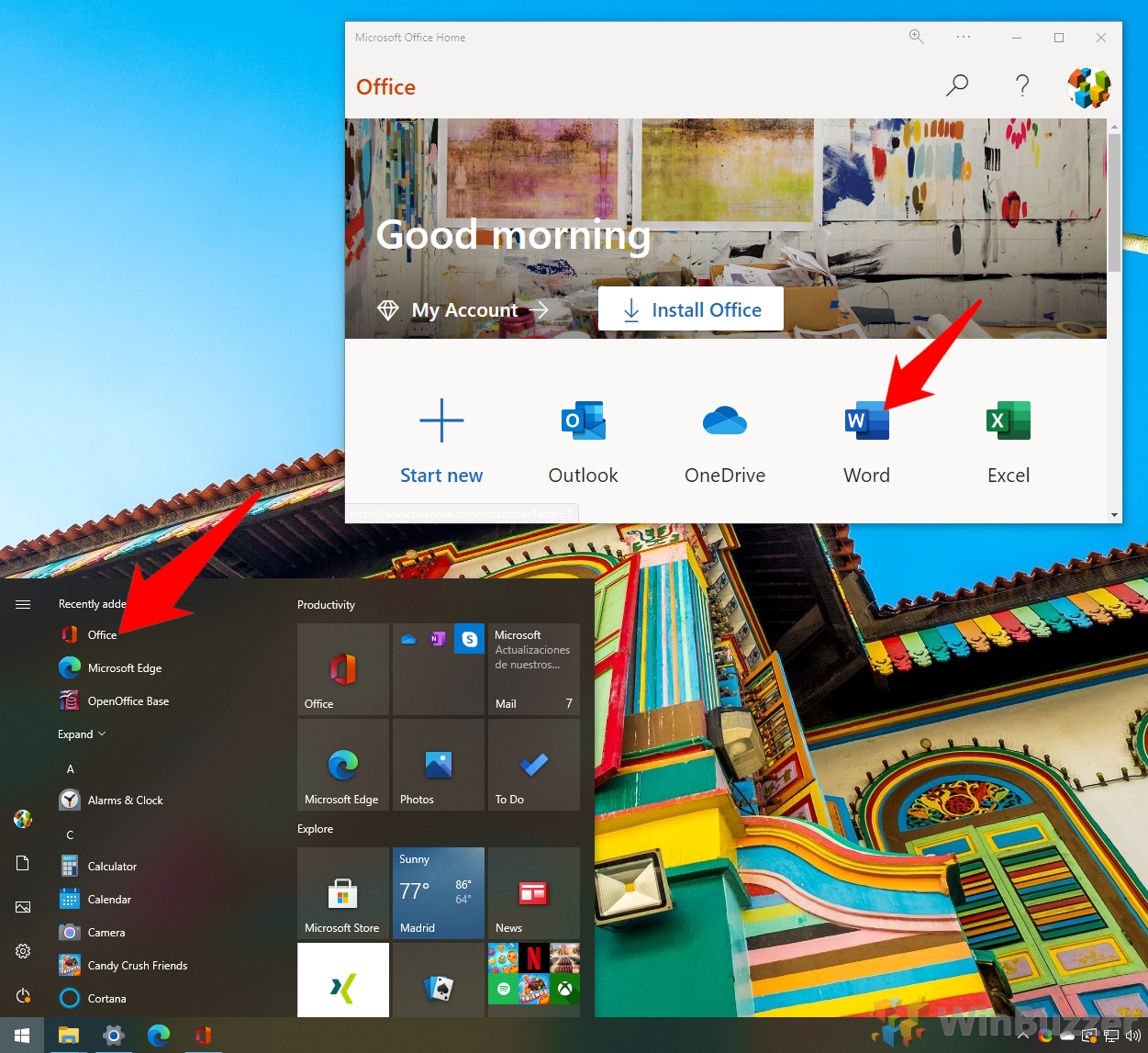 Speaking of Google, its free Docs service has the ability to open and edit .doc and .docx files without much hassle. Though like Word Online it does require an internet connection and use of the browser, it produces passable results for those already in the Google ecosystem and works on Linux, Windows, MacOS, and Chromebooks.

You can open a word document online via Google Docs by pressing the ‘File picker’ folder tucked away on its start page. 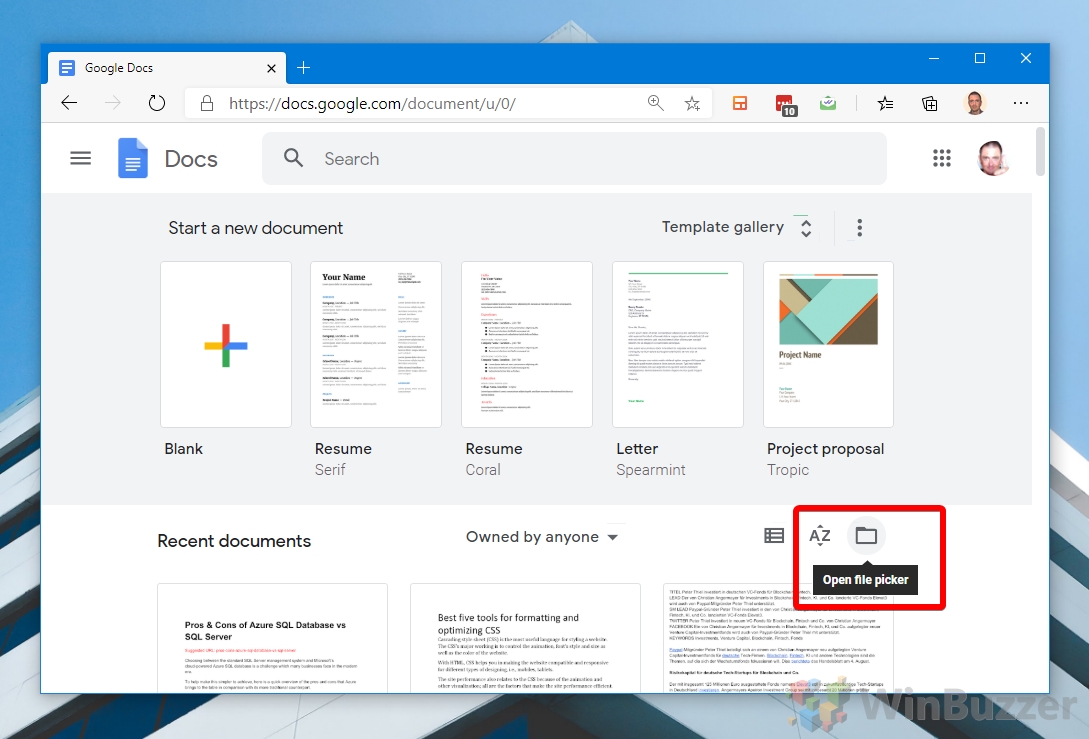 Users are then presented with the familiar Google Drive upload interface, where they can browse to or drag in their Word Document. 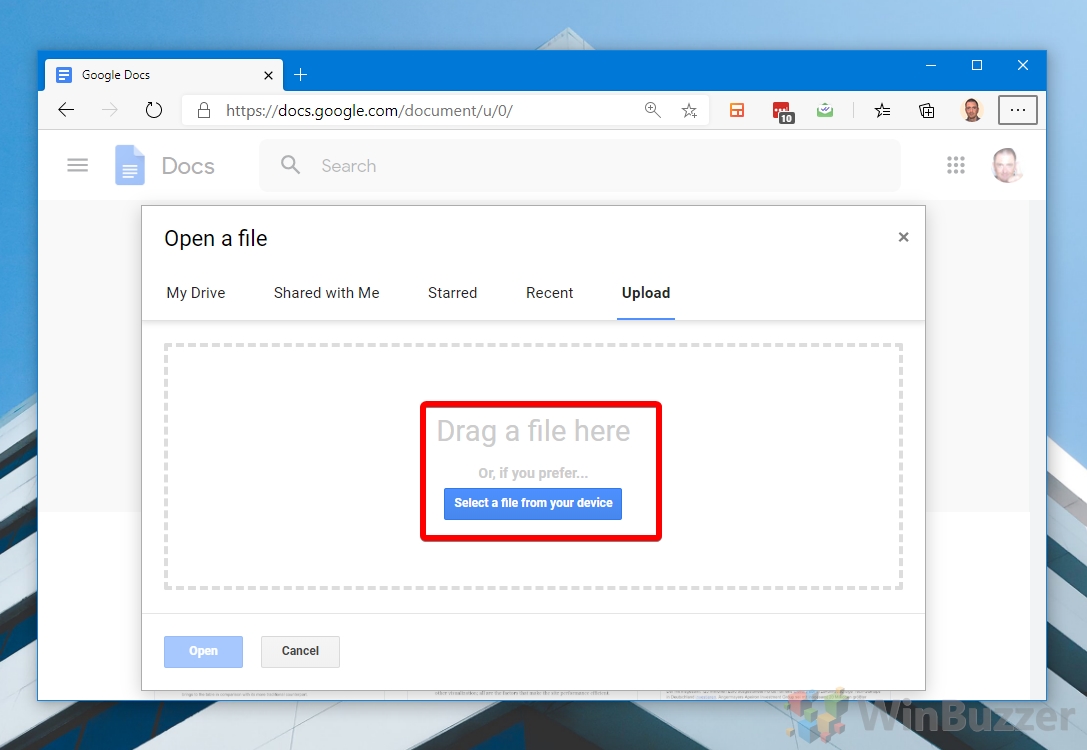 Though Google Docs create some changes to font, page width, and transparency compared to Word Online, the results are generally pretty good.

The best option to open and edit DOCX files on the desktop in our testing was WPS Office. Though you will have to deal with some minor advertisements unless you pay or block it in the firewall, the results are very promising.

Though we threw a complex Word document at WPS Office, it managed to handle it almost on par with Microsoft’s Word Mobile. Font, width, image fidelity, and formatting were maintained, with the only downside being a loss in transparency with the Office logo in the top right. 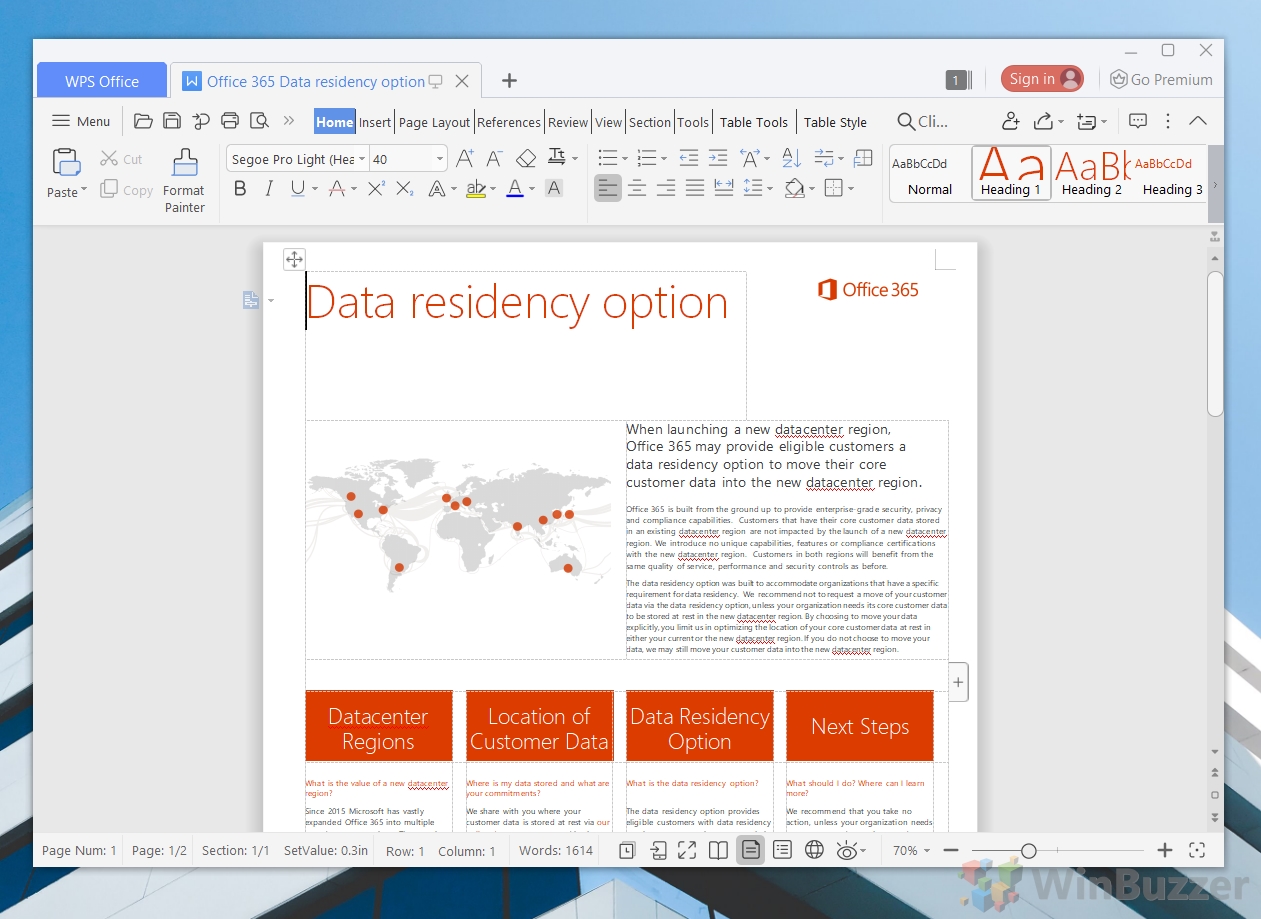 WPS Office has native apps for Linux, MacOS, Windows, Android, and Linux, but you can’t use it to open Word documents online, so Chromebook users are out of luck. Users also report that it doesn’t deal with multi-language or proofing particularly well.

How to Open Word Documents Without Microsoft Word via Only Office

Another option WinBuzzer tested to open our test document was OnlyOffice, which almost looks a little too familiar to Microsoft Word in its interface. It offers a 180-day free trial or a free community edition, making it an attractive pick on the surface.

However, in our testing it didn’t produce results on par with the competition, significantly changing the typeface and resulting in some other issues. It was one of the few to maintain transparency on the Office 365 logo, though, and does support Mac and Linux, so that’s a plus. 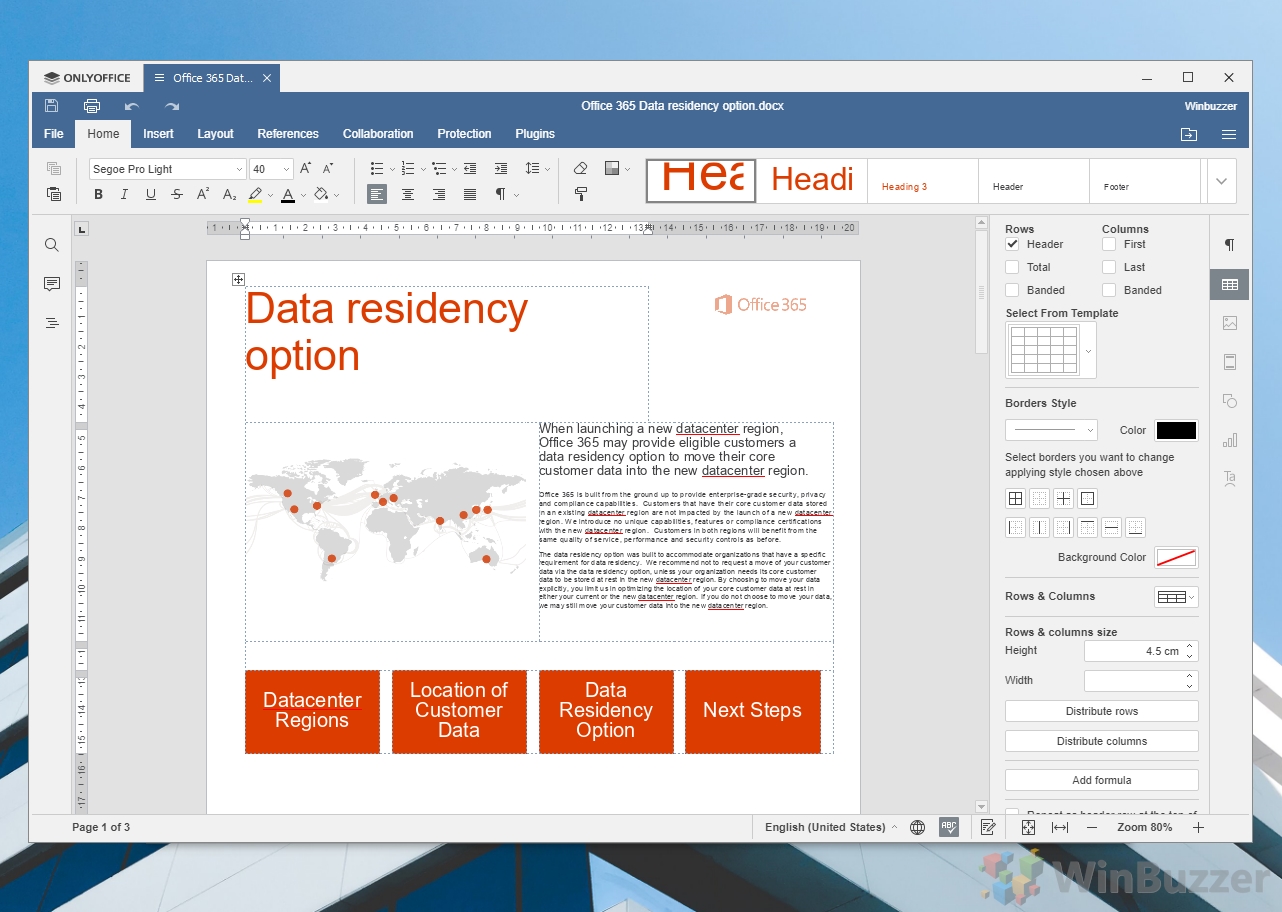 Still, the document we through at the application was a difficult one. It’s likely to handle simple documents just fine and provides a very familiar layout.

The open-source LibreOffice, more specifically, its Writer app, is often touted as a strong alternative to Microsoft Word. Unfortunately, in our testing, it didn’t seem to live up to its fame, breaking the formatting of the test document quite significantly, changing its font to serif and pushing the table (with malformed headings) down to the second page. 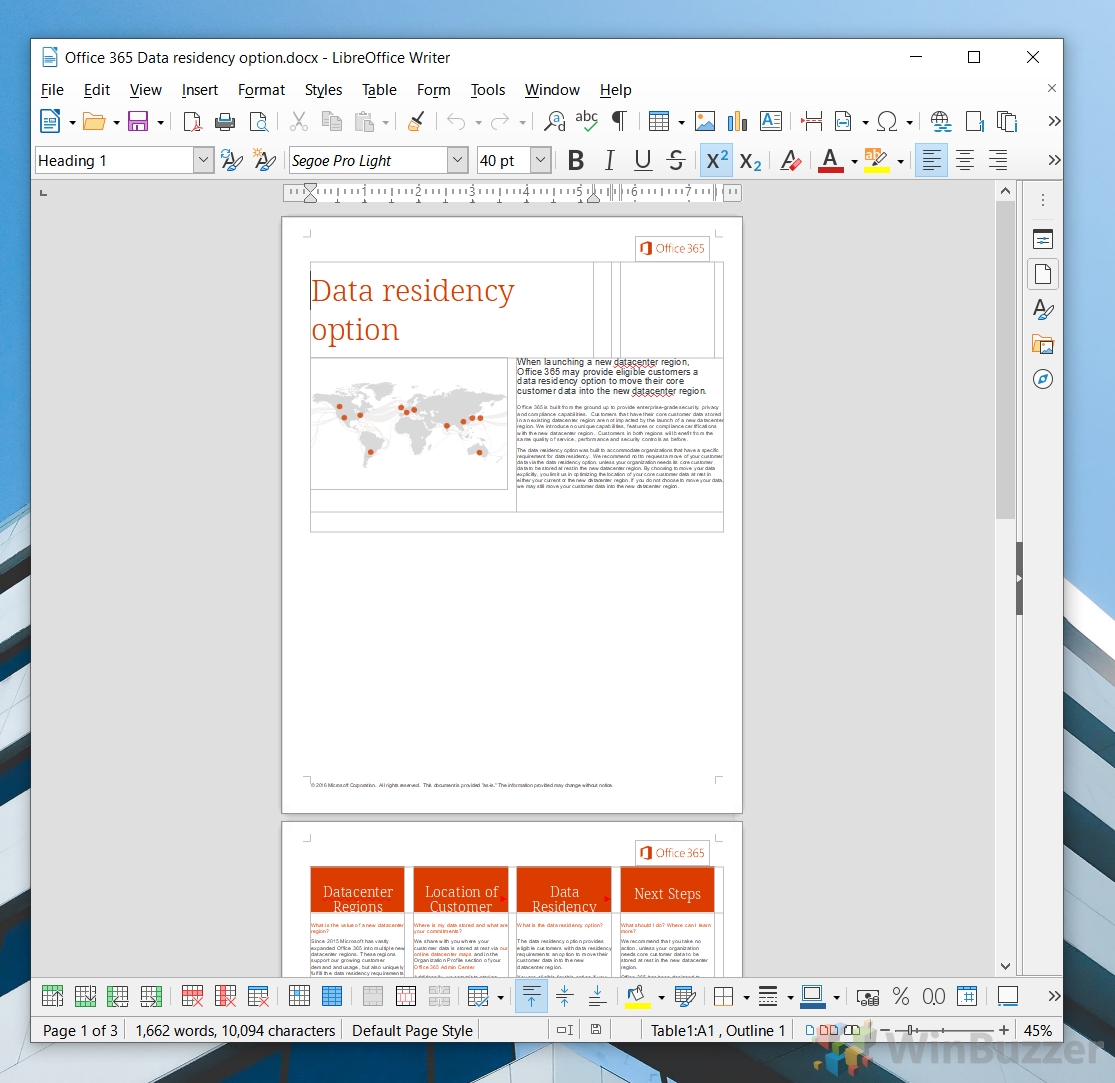 Again, this is likely one of those scenarios where your results will depend on the complexity of the document. Though LibreOffice may be suited to view and edit simple documents, its ability to open DOCX files appears to break down once you start adding elements like tables.

That said, LibreOffice does offer a more simple and oftentimes more intuitive interface than Word, if not quite as pretty. It’s also lightweight and cross-platform.

The more outdated Apache OpenOffice is also an option when it comes to Microsoft Word Viewer alternatives, though we wouldn’t recommend it. Though it does let users edit DOCX files and is multi-platform, the results we got were significantly worse than WordPad with our specific document. 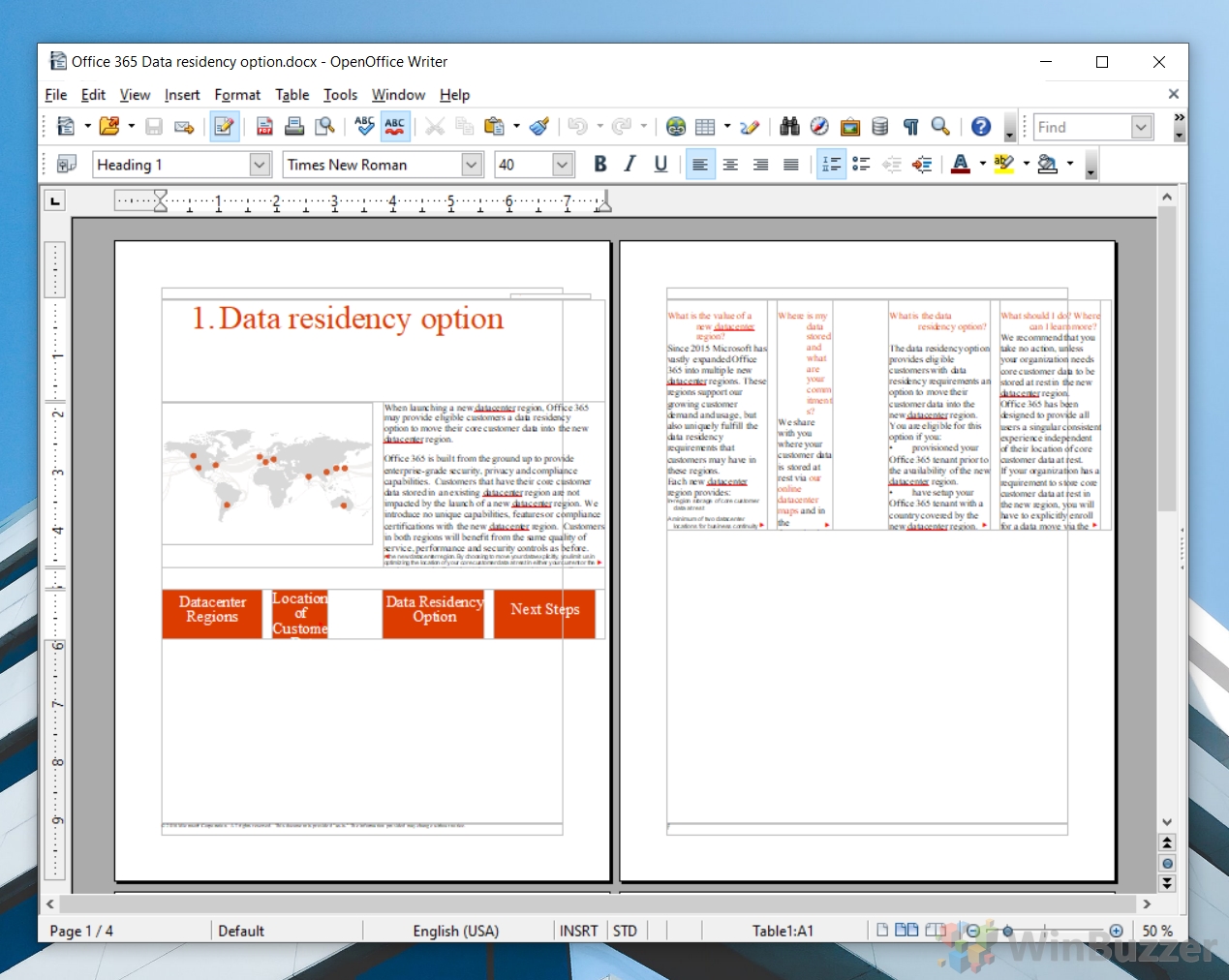 Open Office completely broke the layout of the page, forcing the text to move vertically down table columns, pushing content to the next page, and significantly modifying the font. The Office 365 logo in the top right seemed to disappear completely. Unless you’re running very old hardware, there isn’t much reason to use this over LibreOffice or other alternatives these days.

Those wondering how to open a Word document without Office have plenty of options, but they vary in their compatibility. We found WordPad to be a good choice if you need to view and edit something without additional software, while Word Online was the best of the online offerings, especially when combined with Chromium Edge’s PWA feature. For the desktop, WPS Office came out the clear winner, though its ad-based model definitely won’t be for everyone.