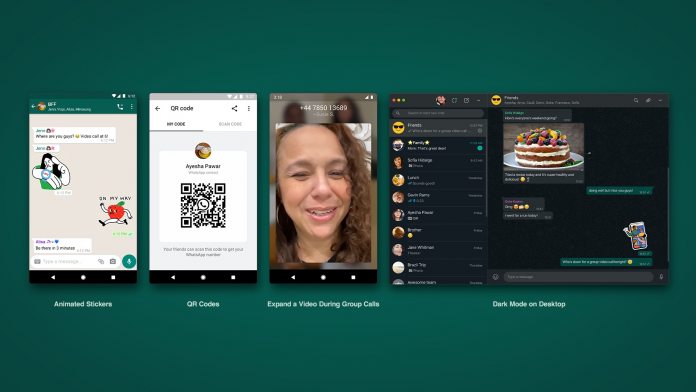 While services like Zoom, Microsoft Teams, and Slack battle over enterprise communication, WhatsApp continues to lead the way in terms of consumer-fronted tools. The Facebook-owned company has also done a decent job at avoiding the numerous controversies that have befallen its parent company.

For the most part WhatsApp has focused on enhancing the user experience. With that in mind, users will be pleased to see a new update for the app. Releasing in the coming weeks, the update adds a few important new tools.

Leading the way is animated sticker packs. These pretty much do what they say on the tin. Users can now send and receive stickers that are… well, animated.

Elsewhere in the update, WhatsApp is expanding its capabilities with QR codes. Specifically, users can add new contacts by scanning their QR code. This avoid needing to manually input contact information.

If you’re a user of WhatsApp on the web or desktop, you’re in for a design treat. This coming update adds a new Dark Mode. Lastly, the app is getting some group video improvements allowing up to 8 people. It is clear WhatsApp is not aiming to compete with Zoom in this area, but it’s good to see the expansion.

It is worth noting Zoom allows up to 49 video call participants, whereas Microsoft Teams provides 9. Microsoft will be expanding to 49 this fall.

It seems the update will be rolling out across platform on Android, iOS, Web, and Desktop (Windows and Mac).