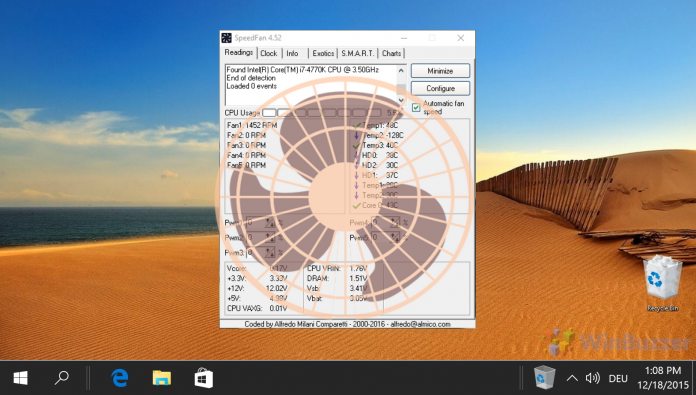 All too often, the fan profiles that PCs and laptop ship with fit into two categories: they sound like a vacuum cleaner or they’re so quiet that your CPU is essentially on fire. As a result, manual fan speed control is often a necessity to maximize performance or silence, with SpeedFan the widely accepted fan controller to achieve that goal.

Why is fan speed control important?

A device with high-spec internals but poor cooling may as well just ship with worse hardware. If you have a low fan speed in Windows 10, it can lead to thermal throttling as soon as the device comes under load. Naturally, blowing hot air out of a PC does a lot to keep all of the internals cool, ensuring it doesn’t become an oven for your internals.

An optimized profile is particularly important when it comes to CPU fan control, especially in laptops. Laptops often ship with slower processors than their desktop counterparts to begin with, and thermal throttling can further reduce clock speeds and other factors until your PC starts to slow down.

Thankfully, most OEMs build in laptop fan speed control, and in it’s basically guaranteed that a PC fan speed controller will work. You don’t need your blowers at 100% 24/7 either – the ideal curve will have your device quiet under load but ramp things up once you start doing intensive tasks like gaming. We’re going to show you how to use speed fan to control and check your fan speed in Windows 10 in search of that perfect middle-ground.

How to Use Speed Fan for Windows Fan Control

The first step to check fan speed is to download and install SpeedFan. We won’t insult your intelligence by walking you through the install wizard, but here’s a handy link to a download page.