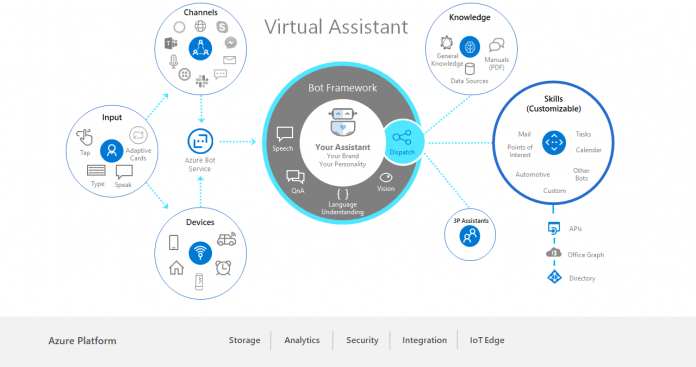 I’ll touch on the GA of Virtual Assistant Solution Accelerator before getting to the more interesting changes made to Microsoft Bot Framework. If you’re unfamiliar with this tool it provides a solution for creating and customizing virtual assistants.

Microsoft is expanding the functionality of the Virtual Assistant Solution Accelerator. The tool now includes integrations for a calendar, to-do, and “who” queries. If you’re interested in the Accelerator, you can check it out on GitHub as an open source project.

Elsewhere, Microsoft also announced Bot Framework Composer is now moving to general availability. With this tool, customers can create conversational bots easily. Importantly, this is a for-everyone tool that does not require developer experience. That’s because the composer is a designer tool that does not use code.

Available on Windows, MacOS, Linux, and on the web, Bot Framework Composer creations can be integrated with other bots.

At Build 2020 last month, Microsoft also revealed the Bot Framework Software Development Kit has reached version 4.9. With this update, the SDK comes with plenty of new APIs and some important new support features. For example, the SDK now has a GA version of Active Dialogs, which help developers provide their bots with the ability to change context during a conversation.

Lastly, Microsoft announced versions of the Bot Framework running SDK 4.8 or later can now tap into Amazon’s Alexa. This is the first time developers on the framework could officially access the thousands of skills provided by Alexa.