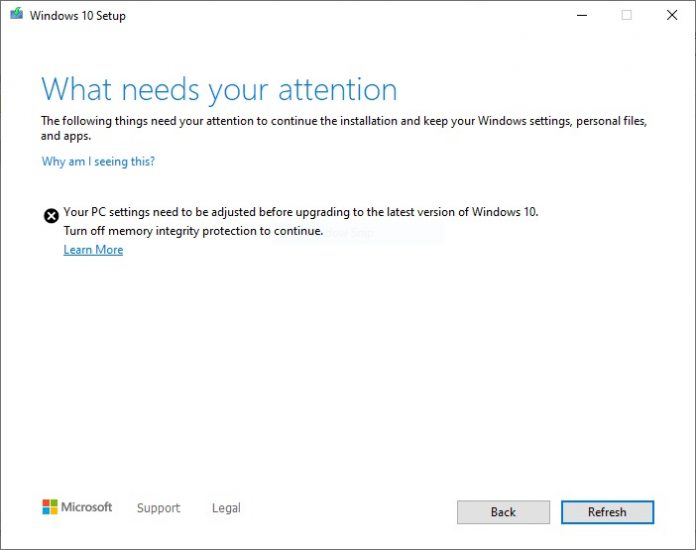 Microsoft yesterday initiated the release of Windows 10 May 2020 Update, which is now making its way to everyone… well, almost. It seems a subset of Windows 10 users could face issues if they install version 2004. In response, Microsoft has blocked those users from updating to the latest version of the OS.

In a document published by Microsoft, the company said it has blocked Windows 10 May 2020 Update for all PCs running Hypervisor-protected code integrity (HVCI) or Memory Integrity. For users with those tools running, trying to install Windows 10 version 2004 will result in the following block message:

“Your PC settings need to be adjusted before upgrading to the latest version of Windows 10. Turn off memory integrity protection to continue.”

Also in the blog post, Microsoft points to the following issues that have caused the delay:

While the update is blocked, users can work around it. Firstly, you can update the drivers for the display drivers Microsoft says are incompatible with Windows 10 May 2020 Update. Secondly, if you cannot find an updated driver you can simply disable Memory Integrity:

Once you disable Memory Integrity, you’ll need to restart your PC and you should be good to go with Windows 10 version 2004.

In the meantime, Microsoft says it is working on a permanent fix.