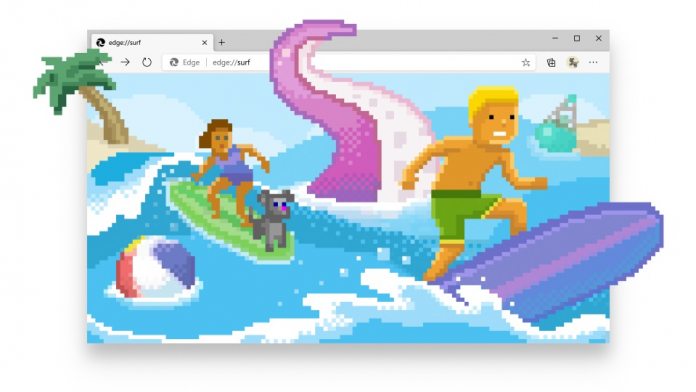 That means anyone can now access the “Surf Game” on their Microsoft Edge browser. As a refresher, the game is a riff on a classic title called SkiFree that was part of Entertainment Pack 3 for Windows way back in 1991.

Now that the Microsoft Edge Easter egg game is available, users can visit edge://surf to play. If you don’t have an internet connection, Microsoft will send a link for you to play the game offline. It is worth pointing out the game will only work if you’re running Edge version 83.0.478.37 or newer.

In a blog post to announce the availability, Microsoft says a full release has been the number one request amongst Insiders:

“Upon the conclusion of the Easter Egg, the number one request from Insiders was to turn the surfing game into an endless runner as the permanent “offline game” for Microsoft Edge.”

Looking at the classic surf mode, players must avoid several obstacles while a kraken follows behind. If you hit an obstacle and the monster catches up, the game is over. Time trial mode functions a little like an endless running game. Microsoft has added coins and shortcuts that help to reduce time.

This little browser game even comes with support for touch, keyboard and mouse, and even Xbox One gamepads.