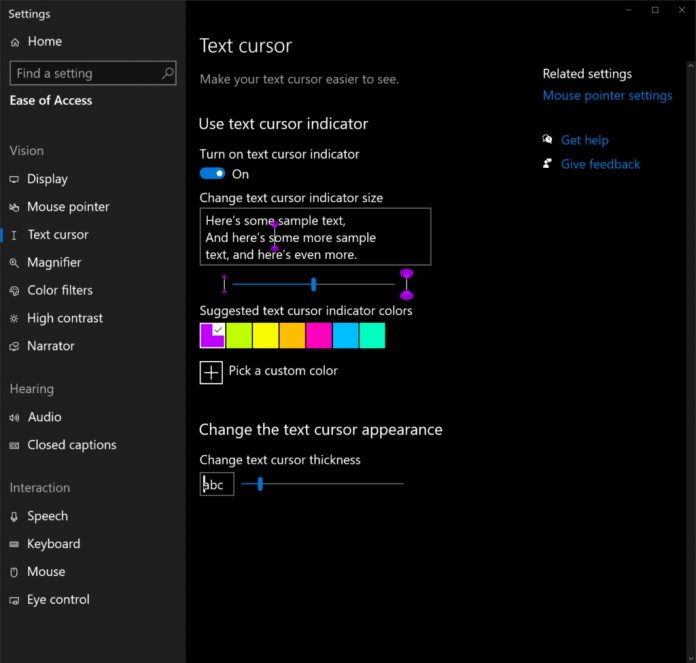 Microsoft has announced some new tools coming to Windows 10 accessibility. According to the company, the update is focused on making it easier to see the text cursor through the Magnifier tool in Windows 10.

Furthermore, Microsoft says a new text-to-speech feature is now also included in the Magnifier. Elsewhere in the accessibility suite, there have been some improvements made to the Narrator.

It is worth noting the changes are not available just yet. Microsoft says they are rolling out with the Windows 10 May 2020 Update, which is rolling out to users in stages.

Microsoft is essentially extending tools it already offers in the standard mouse cursor to the text cursor, including the ability to adjust size and color. This will help visually impaired Windows 10 users to change the color, thickness, and general size of the text cursor.

As for the Magnifier, it will now track with the text cursor in the center of the screen. Again, this is an ability that is coming from the standard mouse cursor on Microsoft’s platform.

Staying with the Magnifier, Microsoft has added a text-to-speech tool that reads out text within a browser. It supports Edge, Chrome, Outlook, Word, and PowerPoint. To facilitate this ability, the Magnifier now has new media control buttons to manage playback.

Finally, Microsoft has improved some aspects of the Narrator. If you’re unfamiliar with Windows 10 Narrator, it is a tool that reads text on the screen so users can navigate and use the platform without seeing the screen. Among the improvements are clearer talkback of capital letters and words.