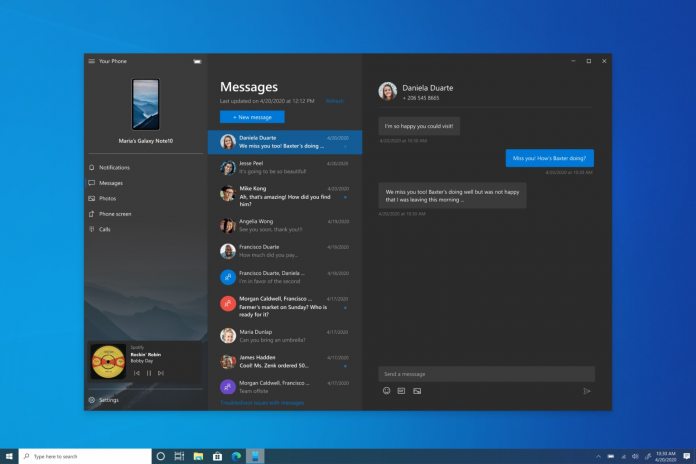 The ever-expanding features of Microsoft’s Your Phone app will soon include the ability to control music on your Android smartphone from Windows 10 PC. Microsoft has confirmed the new feature in preview. It is another movement towards being able to fully control your smartphone via PC.

When media is played, the media controls from the Android phone will now be available on Windows through Your Phone.

Microsoft has been consistently expanding the capabilities of Your Phone since it launched in 2018. Many users would have preferred to have a fully featured app from the start, but at least more functionality is available now.

Controlling media files is one of the tools that makes the Your Phone something people will be willing to use.

In fact, Microsoft is already working on taking music controls to the next level. Specifically, the company is developing a feature that allows users to see what music is playing on their phone. Like other aspects of Your Phone, the ability will be limited to only Android 7 or newer.

This tool will include a full drop-down menu with options including moving between music apps, such as Spotify and Google Play Music. Furthermore, we can also see full playback buttons for music control in the taskbar.

Among the apps supported are also Amazon Prime Music, YouTube Music, and Pandora. Microsoft will out the feature during next month.

Earlier this month, Your Phone scored another important addition in the form of drag and drop abilities. There are a couple of limitations, however. Firstly, drag and drop on Your Phone will only work for individual files and not folders. Secondly, for now the feature is only available for Samsung smartphones.

Furthermore, it’s only possible to transfer up to 100 files at once and individual files are limited to 512MB in size.