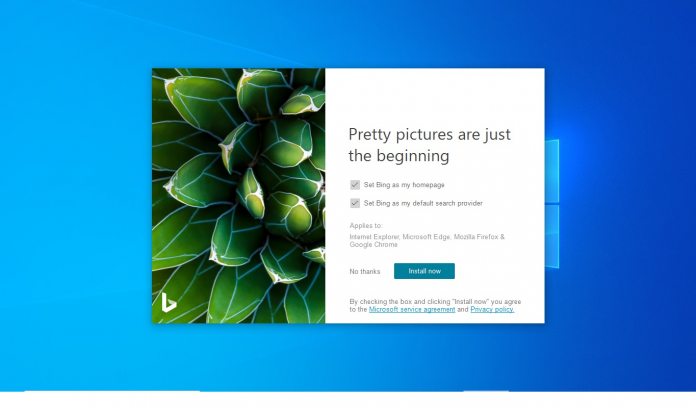 One of the most popular features of Microsoft Bing is the search tool’s rotating wallpaper screens. Featuring beautiful images, people who use Bing almost always opt to use the built-in wallpaper picker. Now Microsoft is now making these images available in a new Bing Wallpaper application.

As the name suggests, the Bing Wallpaper app curates images featured on Bing homepages. Importantly, the app allows users to access these images and use them as wallpapers on their Windows 10 desktop.

Microsoft has not made a big deal out of this launch. In fact, Bing Wallpaper was rolled out quietly with only a brief Twitter announcement by Bing grow executive Michael Schechter:

“We just shipped an officially supported way to set the Bing homepage image as your desktop wallpaper on Windows.”

We just shipped an officially supported way to set the Bing homepage image as your desktop wallpaper on Windows – happy Friday! – https://t.co/lsR3fB473k

One curious aspect of this release is how Microsoft has made the app available. Instead of placing it in the Microsoft Store, the company is distributing Bing Wallpaper through the web. Furthermore, it would make more sense if the app were baked directly into Windows 10 automatically.

When the app is installed on Windows 10, it works just like on the Bing homepage. If you’re unfamiliar, this means it will change the wallpaper each day and you can like or dislike images. Bing will curate images for you based on your interactions.

Users can also tap directly into Bing images from the wallpaper.

“Bing Wallpaper includes a collection of beautiful images from around the world that have been featured on the Bing homepage,” Microsoft explains. “Not only will you see a new image on your desktop each day, but you can also browse images and learn where they’re from.”