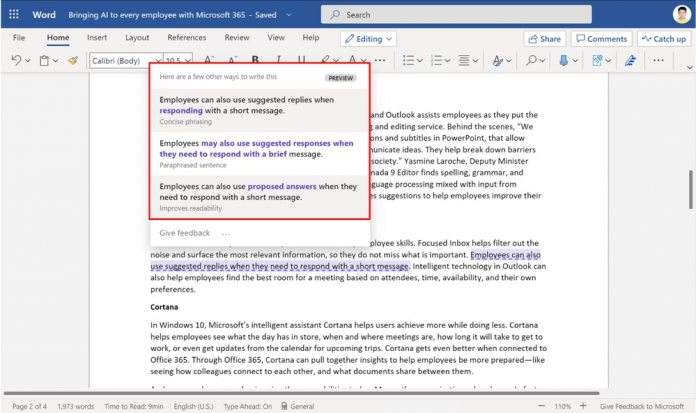 Microsoft has furthered its push against automatic grammar tools like Grammarly. Thanks to a new AI-powered Microsoft Word integration, users can have whole sentence suggestions as they write. Packaged as an updated version of Rewrite Suggestions, the tool is limited to Office 365 and Microsoft 365 users.

Before getting into the details of the tool, it is worth noting the new Rewrite is only available on Microsoft Word for the web.

When users type in Word, the tool will help them rephrase awkward sentences and make them easier to understand. This might mean changing the entire sentence structure or offering tips for making the phrase read better through more efficient expressions.

According to Microsoft, the Rewrite Suggestions AI is built on “cutting-edge, neural-network, machine learning models, which are trained on millions of sentences“. The company points to the following features provided by the tool:

A rewrite suggestion card shows up near your sentence. It offers different of types of suggestions:

While Rewrite Suggestions is certainly a handy tool, it needs to be triggered by the user. As such, the user needs to understand when a sentence is problematic. Once a sentence is highlighted, the AI will show suggestions in a context menu.

Three suggestions are shown that will help to improve the flow of a sentence. It is worth noting if a sentence is fine Word may offer no suggestions.

In recent weeks, Microsoft has embarked on a frontal attack on content helpers like Grammarly. Last month, the company updated the Editor feature on Microsoft Word to offer more nuanced suggestions.

Microsoft has since moved the Editor to Chrome and Edge as a web extension.