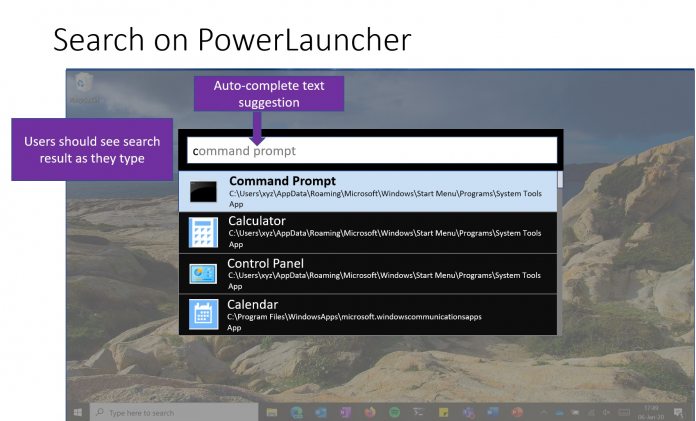 Microsoft is continuing to expand the capabilities of its PowerToys platform and could be readying its PowerLauncher tool for the suite. The launcher has been in development since last year and we first discussed it in January. According to The Verge, Microsoft will bring the launcher to PowerToys in May.

PowerLauncher was developed by Jessica Yuowono, a Program Manager for Microsoft. The App allows users to launch an app instantly and search for other tools. Other features on the service include auto-complete.

Microsoft says PowerLauncher is designed to make it faster to find search results than the Win+S shortcut. The tool will expand on the capabilities of the Start menu in Windows 10. While searches on the Start are driven by Edge and Bing, the PowerLauncher will support customized searches.

For example, users will be able to search across Windows and launch PowerShell, cmd prompts, and Regedit.

Help us name our Win+R project (we call launcher internally) for Power Toys. It can do more than just launch apps so trying to be sure we have a great, straight forward name that works for everyone

Back in May 2019, Microsoft rebooted its PowerToys, a modern version of the suite of tools that appeared on Windows 95. The core difference was that the suite is now open source.

Since rebooting PowerToys, Microsoft tweaked existing tools and added new ones like Keyboard Configuration. As the development team moves towards version 1.0 of the suite, there are four new features coming.