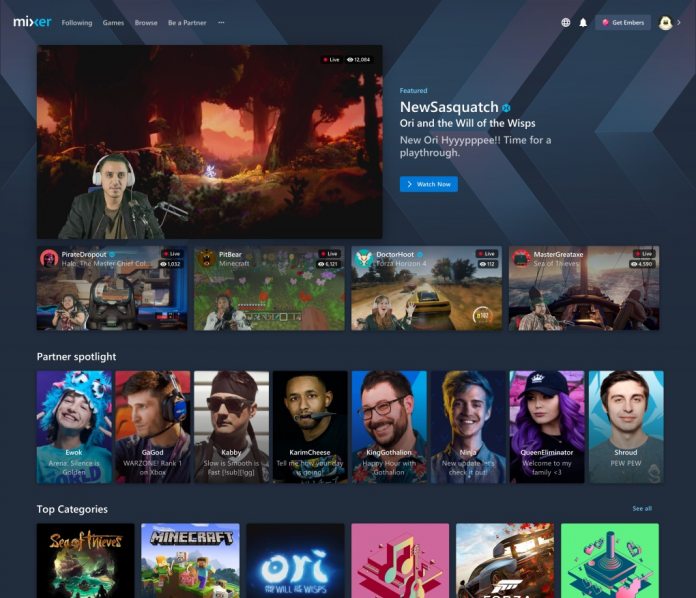 Microsoft has announced an update for its Mixer game streaming service. This is not just some performance and bug fixing bump. Instead, Microsoft is rolling out extensive changes to the platform that is becoming an increasingly viable competitor to Switch.

Indeed, for those of use who have followed Mixer closely, the growth of the service over the last year has been surprising. Not least because it seemed Microsoft was starting to lose interest in game streaming.

Only weeks after many observers predicted Mixer would eventually be closed, Microsoft announced an exclusive deal with Ninja, the world’s most watched streamer. Several other high-profile game streamers followed and Mixer’s stock has since risen.

Looking at the updates Microsoft is planning, there’s plenty to be excited about. Perhaps the biggest change is a new homepage. Rolling out across all platforms, the homepage makes it easier for users to focus on featured content.

Elsewhere, auto-hosting is coming to everyone on Mixer after months in preview. This means users can switch to a new streamer from a list whenever they want. Previously, switches would happen when a hosted streamer went offline.

Other changes coming to the platform include improved emotes, ad breaks, and improvements to the Xbox viewing experience.

“New Mixer homepage – Mixer has refreshed the Mixer homepage across all platforms to give more focus to featured content as well as provide smart, AI-powered recommendations. The most immediate change you’ll notice on your homepage is that Mixer has introduced a new layout that displays all featured creators at the same time.

Below the “Featured,” “Top Category,” and “Partner Spotlight” sections, you’ll also find brand new content rows. These rows will highlight and recommend streams from community events, cultural moments, and more tailored content as time goes on. The rows will be a mix of AI-powered personalized recommendations and editorially programmed content, ensuring you can discover and join even more communities across Mixer.

Auto-Hosting for everyone – Mixer has spent the last month testing Auto-Hosting with Mixer Partners and now Mixer is excited to share it with every streamer. With this feature, you’ll be able to create a list of specific streamers that you want to automatically host when you’re offline. Mixer has added a host of customization options as well.

Higher-Quality Emotes – This top community ask is no longer “Soon™”, it’s finally here! Starting today, Mixer has enhancing all emotes to 28 pixels across all platforms, introducing new prefixing requirements and completely refreshing our global emotes. New global emotes will be visible today and all partner emotes will be updated over the next few weeks.

Ad Break (Beta) – Our Mixer Partners have been testing advertising pre-roll for the last few months and now Mixer is expanding their advertising testing with an Ad-Break beta. With this, Partners can choose when they want to run ads during their stream. This was a request from the Mixer Partner community, and Mixer has excited to be testing it as part of the full package of monetization opportunities on Mixer.

Xbox Viewing Improvements – Mixer has continuing to add more features to the new Mixer viewing experience on Xbox. This new experience is built from the ground up to get you to your favorite streamers as fast as possible. With the April Xbox One system update that’s in some Insider rings now, you’ll see the additions of emotes and subscriber badging in chat.

Ember messages will also get the flair they deserve to help them stand out. Mixer has also made it easier to access stream settings for selecting chat layout or video quality. Outside of this latest Xbox One system update, Mixer also expects to have Gift Subs available in the new experience in the coming weeks.”