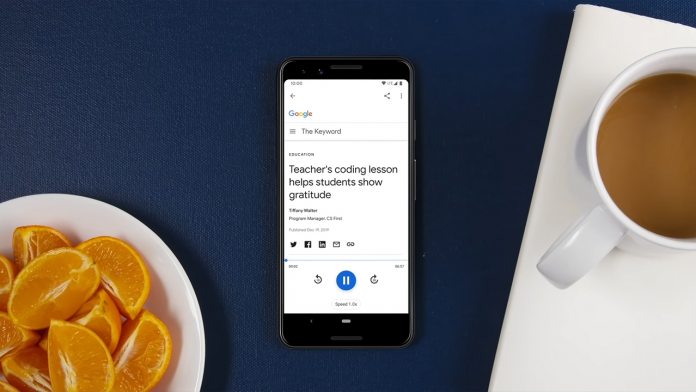 Google Assistant’s ‘Read It’ feature, first announced at CES 2020, is now available to all. With the addition, users can ask the assistant to read any webpage, across 42 languages and across the world.

To activate the command, you just invoke with the usual “Hey, Google,” followed by “read it”, or “read this page”. Though the first is naturally shorter, you may have better luck with the second if the assistant mishears you frequently.

You’re then presented with a UI very similar to Google’s audiobook app, as well as the AMP version of the webpage. The text highlights as it’s read, and you can skip forward and back by 30 seconds at will.

Interestingly, Google can even translate the page into a different language as it reads it back to you, which is good for language learning. You can choose between multiple male and female voices to your preference, with all feeling pretty robotic but doing a surprisingly good job at intonation.

This feature will obviously be a huge help to any with eyesight impairment, but it’s also nice for regular users. With audiobooks so popular, it’s clear many prefer their text read to them these days. Switching an article to its spoken mode also lets you keep your eyes and hands-free so you can do something else.

The only other requirement is Android 5.0 or higher. Unfortunately, it does appear to be limited to the web and the Google News app for now, so you won’t be able to use it with Microsoft News on Android, for example.

Still, this is an interesting feature that shows how far natural reading AI has come in the past few years. In my testing, the assistant was able to read an entire novel from Gutenberg.org with no issues at all. One day, AI may be able to replace humans in audiobook creation, greatly reducing their cost.