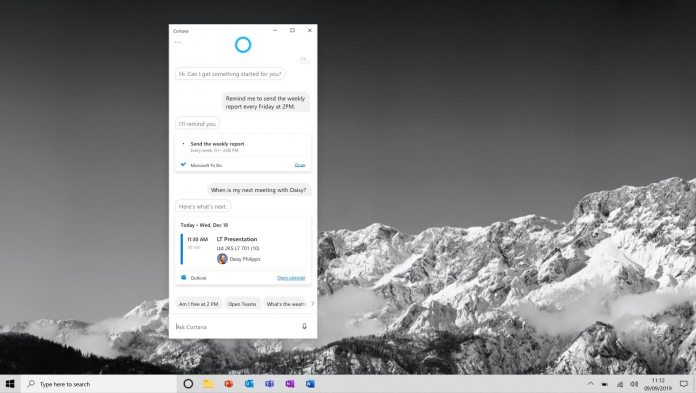 It’s been around two years since Microsoft said it was all but ditching Cortana as a personal assistant. The company said it would refocus the tool as a productivity assistant for Windows 10. Since then we have seen numerous changes made towards that goal. Now, Microsoft has revealed substantial changes for Windows 10 20H1.

In fact, Microsoft’s promise to transform Cortana into a productivity tool is all but complete. In its announcement, the company has confirmed the removal of many consumer-fronted features.

Cortana was engrained into the Windows 10 experience and built into the search tool. Microsoft separated Search and Cortana last year and now the assistant’s role on Windows has been diminished further. Indeed, Microsoft says from Windows 10 20H1, she will only be available to people with a Microsoft account.

If you have continued to use Cortana as a personal assistant for smart home devices and general commands, it’s game over. Microsoft says all those tools are being removed:

“Some consumer skills including music, connected home and third-party skills will no longer be available in the updated Cortana experience in Windows 10. We’re also making some changes to where Cortana helps you. As part of our standard practice, we are ending support for Cortana in older versions of Windows that have reached their end-of-service dates.

“We recommend that customers update their devices to the latest version of Windows 10 to continue using Cortana. We’ll also be turning off the Cortana services in the Microsoft Launcher on Android by the end of April.”

Still, if you want Cortana to run some of your productivity, the assistant will remain useful. She can make calendar adjustments and checks, set reminders, perform searches, open apps, set alarms, change settings, give information, and help you send messages.

As we already know, Cortana is now a dedicated Microsoft Store app that is separated form the Windows 10 experience. We have seen the Cortana app evolve through preview development on the Inside. When Version 2004 drops in May, the app will be widely available out of beta.