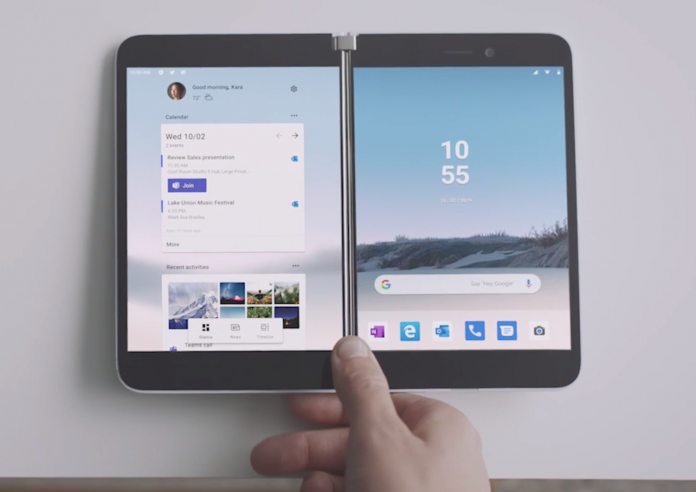 We have known about the Surface Duo since it was announced by Microsoft in October. However, the company made it clear the Android smartphone was a prototype and would not launch until holiday season 2020. As such, information about how the Duo will perform and what features it has is scarce.

While some Microsoft patents shed a little light on the Surface Duo, we really know little about it. Today, a video leaked online shows a new feature that Microsoft is introducing on the Duo. Reported by WalkingCat, the feature called “Peek” allows users to see notifications without unfolding the Duo.

As you probably know, the Surface Duo is a twin-screen smartphone. Both screens are located on the inside of a book-like shell form factor. Both 5.6-inch displays are separated by a middle (albeit small) bezel. However, they can be extended into an 8.3-inch tablet screen. With a 360-degree hinge, the Surface Duo will be hugely functional in numerous modes.

That said, it won’t be very functional when it is closed. In fact, it will be a hard shell on both sides with no access to the screens. This is where the Peek feature will be important as it will allow users to interact with the handset without opening it.

Interacting with A Closed Phone

How to allow users to interact with a closed shell device is something other smartphone manufacturers have dealt with. Samsung and Motorola with their folding screen devices have placed a secondary small notification on the outside.

Microsoft is seemingly not taking this approach. Instead, Peek will allow the users to only open the Surface Duo marginally to see the notification.

I am not sure how productive this feature is. On paper, it seems pointless as if you open the Duo a little, you may as well open it the whole way.

Microsoft’s video shows that the UI will be slick but does little to convince me a screen on the outside would not be a better option.