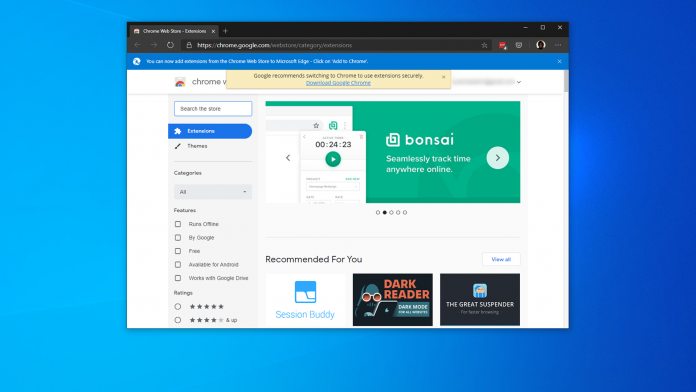 Google is up to its browser shenanigans again. Users on the new Chromium-based Edge are now getting warnings when they try to install extensions from Chrome’s web store.

“Google recommends switching to Chrome to use extensions securely,” a pop-up reads when you visit the store. “Download Google Chrome.”

The search giant does not specify what security issues it’s talking about, nor does it link to any webpage that explains the statement. Both Edge and Chrome are based on the same underlying browser engine, so you’d think that security measures would be quite similar.

My guess is that Google is referring to the fact that it can’t verify that Edge handles extensions in the same way that Chrome does. It doesn’t display the same warning in other Chromium browsers like Opera and Brave, though, only sniffing out Edge user-agents. This will lead to speculation that this is a ploy on Google’s part as it becomes increasingly concerned that Edge will eat into its market share.

A former Microsoft Edge intern previously accused Google of intentionally slowing EdgeHTML on its sites. Meanwhile, a former YouTube developer admitted that the company intentionally tried to kill Internet Explorer 6. Google also informs Google Docs users that they must ‘upgrade to Chrome’ to use it offline.

Still, it’s worth noting that the warning doesn’t affect functionality in any way. You can cross out the warning and install Chrome extensions on Edge as usual. Google isn’t using cookies to check if you’ve dismissed the warning previously, though, so you’ll have to put up with it every time you refresh or re-visit the page.

Microsoft is yet to comment on Google’s message or whether using its extensions poses any real security risk. However, it does require users to opt-in before they can install third-party extensions, partly because ones made specifically for Edge are more likely to be properly optimized.