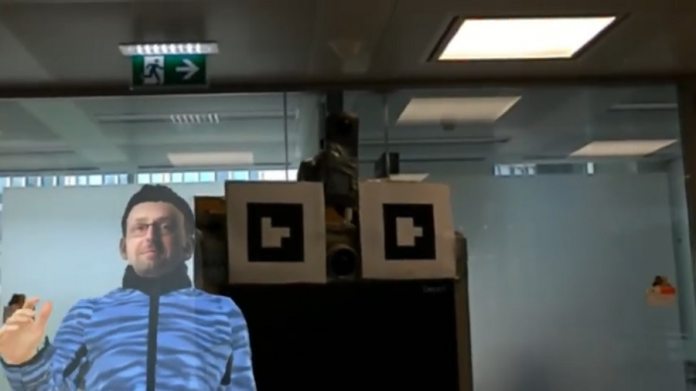 Microsoft Research has published details of a project is called VROOM, or Virtual Robot Overlay for Online Meetings. According to the clip, researchers envisage a robotic system that will allow users to visit other locations with a telepresence robot.

Users would control the robot remotely like an avatar. Other people in the other location would be able to see the avatar through Microsoft’s HoloLens headsets.

Essentially, VROOM would allow meetings to be held without all attendees being physically present.

Not just that, people using the avatars would be able to explore the physical environment. It is worth noting that telepresence robots can already do this, but Microsoft wants to take it further.

Specifically, Microsoft Research says VROOM is a true two-way system that allows the local user to see nuances in movement. On its YouTube video showcasing the system, Microsoft writes the following:

“Telepresence robots allow remote users to freely explore a space they are not in, and provide a physical embodiment in that space. However, they lack a compelling representation of the remote user in the local space.”

“We present VROOM (Virtual Robot Overlay for Online Meetings), a two-way system for exploring how to improve the social experience of robotic telepresence. For the local user, an augmented-reality (AR) interface shows a life-size avatar of the remote user overlaid on a telepresence robot.”

“For the remote user, a head-mounted virtual-reality (VR) interface presents an immersive 360° view of the local space with mobile autonomy. The VR system tracks the remote user’s head pose and hand movements, which are applied to the avatar. This allows the local user to see the remote’s head direction and hand gestures, and the remote user to identify with the robot as an identifiable embodiment of self.”

Information on VROOM is currently scarce and the system certainly looks in the early stages of development. We hope to hear more from Microsoft Research in the near future.