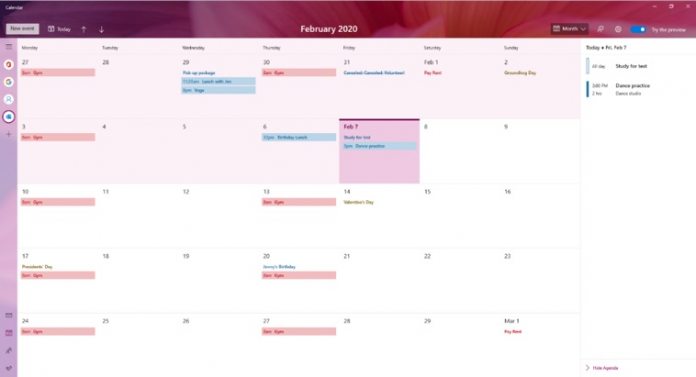 Microsoft has sent out a new Windows 10 Insider Preview build. Available for the Fast Ring, build 19564.1000 comes with an improvement for Graphics. Furthermore, Microsoft has also shown a glimpse of a new Calendar application.

Looking at the Graphics page, this is located under the Display sections of the Settings app. Users can now have more granular control over which apps run on the GPU. Windows 10 will now populate a “best-effort basis” list that shows which apps are best to run under the graphics.

Apps not included in the list automatically can be added manually by the user. There is also a search box available to check for applications. Essentially, using this section will let you choose whether you value battery life or performance more.

As mentioned, there is also a new Calendar app experience on the new Windows 10 Insider Preview. Microsoft has added 34 new themes covering various images, landscapes, and colors. In the month view, the app new shows a news agenda section for you to see events you have schedules.

Elsewhere, users will have new account navigation through a pane that will collapse to allow more space for daily events. A new account sync display is also on board. It is worth noting the new Calendar app is not turned on for Insiders by default. Instead, you have to toggle the button “Try the new preview”.

Microsoft has also revealed a known issue regarding its Narrator feature in Chromium Edge.

“We are aware Narrator and NVDA users who seek the latest release of Microsoft Edge based on Chromium may experience some difficulty when navigating and reading certain web content,” Microsoft noted.

“Narrator, NVDA and the Edge teams are aware of these issues. Users of legacy Microsoft Edge will not be affected. NVAccess has released a NVDA 2019.3 that resolves the known issue with Edge.”