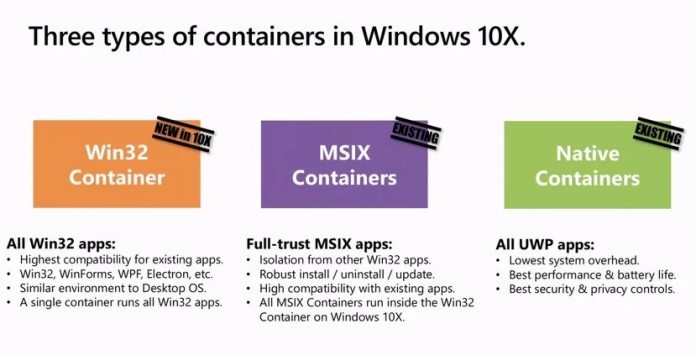 Developers are now testing Windows 10X following Microsoft unveiling an emulator for the platform yesterday. Alongside the reveal, the company also provided some more information about the new Windows fork. Specifically, it seems many Win32 programs will no run on Windows 10X.

10X is built from the ground up and sits on a modern core that removes many of the legacy underpinnings of Windows 10. The idea behind the platform is for its to be more efficient and lightweight.

Microsoft has already said legacy programs will only work through a container on Windows 10X. This means the legacy components those programs rely on will run virtually. However, some Win32 programs won’t work on the platform.

Which apps will work and which won’t is unclear. That said, Microsoft insists most Win32 programs will work without developers having to do anything. For apps that don’t function, the company says it will work with dev’s to ensure they do.

While that’s good news, Microsoft also confirmed there are some apps that will be complete disallowed. This is because of the way the platform is built and not because of any draconian measure on Redmond’s part.

Windows 10X is arguably the most locked down Windows experience ever. Because of its nature, apps that access system files or program data won’t work.

Still, Microsoft is easing concerns. The company says it thinks the average Windows 10X user won’t experience any problems. According to Microsoft, all popular mainstream applications work without a problem.

Of course, Microsoft getting all this out of the way now is part of the plan. Windows 10X will arrive on the Surface Neo when that device launched late this year. The idea behind announcing the Neo a year ahead of its launch was to prepare developers for the changes onboard Windows 10X and the dual-screen form factor of the Neo.