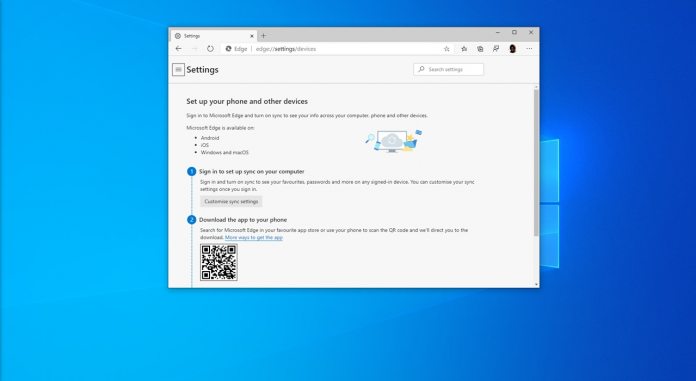 The Canary build of Microsoft Edge has received two notable updates that bring it further in line with its former non-Chromium variant. The first enables easy syncing of favorites, passwords, addresses, and more from your phone and other devices.

A new ‘Phone and Other Devices’ section houses information about the feature, but setup is done primarily on your other mobile or desktop device. On Android, you must download the latest version of the Microsoft Edge browser, before setting up Sync and selecting, “The new Microsoft Edge”.

Unfortunately, the feature does not include history for now. This is primarily for syncing favorites and passwords, which many already use third-party extensions like Pocket and Lastpass for. However, Microsoft does hint that more functionality is coming soon.

Syncing, in general, is one aspect where new Edge falls behind its EdgeHTML counterpart. As well as history, Microsoft also needs to implement solutions for open tabs, extensions, and collections. With hope, we’ll see all of those roll out in the coming months.

In the meantime, you can play around with Canary’s other feature, ‘Multiple Profile Preferences’. This useful addition builds on the existing multi-profile features by letting you choose one to open links in by default. Previously, you could only right-click a link and choose to open it on the other account. This will be particularly useful if you work from home or have a school/personal account.

You can find the new setting under the profile menu, and download the latest version of Edge Canary here.