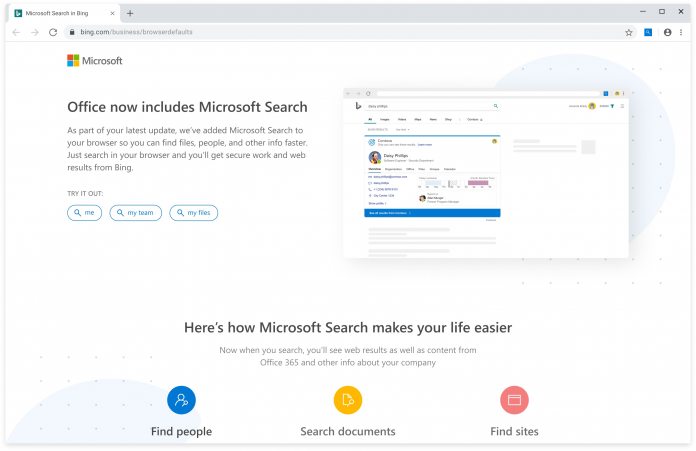 If you’re unfamiliar with Microsoft Search, it leverages the power of Microsoft Graph, the new search experience will work across all core apps, including Bing, Office, Windows 10, and Microsoft Edge, Yammer, and SharePoint.

The upside of Microsoft Search is it gives organizations the ability to access business-wide data easily and more or less in real time.

“Learning from your everyday work patterns and acting as a brain for your organization, the Microsoft Graph personalizes your experiences everywhere. We’re pulling together the power of the Microsoft Graph and AI technology from Bing to deliver future experiences that are more relevant to what you are working on,” the company said.

With the new addition, Office 365 ProPlus users on Google Chrome will now be defaulted to Microsoft Search in Bing. This will be implemented through an extension. Microsoft says if users already have Bing as a default, the extension will not be sent.

It is worth remembering that all users can change to their own chosen default at any time.

Microsoft says the new default Bing is coming to Office 365 ProPlus Version 2002 in the following countries:

The company says the extension will be pushed to other regions in the coming months. Furthermore, the company will also bring it to the Firefox browser during the same timeframe.