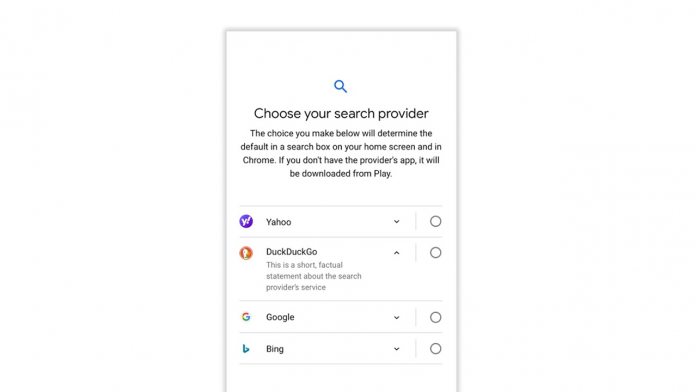 Google has unveiled the search engines that will feature as options for European Android users in the near future. The company was previously slapped by a €4.34 billion fine, partly for “Illegal tying of Google’s search and browser apps”. Shortly after, it announced that users will be able to choose which default search and browser they want.

Controversially, though, the alternatives were sold away to the highest bidder. Google has now announced the result of those bids, which vary somewhat for each country. Its own engine will always be available, of course, and DuckDuckGo will be offered universally.

In the UK, Microsoft’s Bing makes its sole appearance, hitting first, followed by DuckDuckGo and Info.com. Also featuring in some countries is GMX, a subsidiary of United Internet, and privacy-focused search engines Qwant and Privacy Wall.

The bidding will open again in four months, but not everyone is happy. Ecosia boycotted it under moral grounds, saying that selling promotion space goes against the EU’s wishes for an open and free internet.

The ruling has essentially been used for profit by Google when it could have simply let users enter their engine of choice when setting up a new Android device. For its part, Alphabet Inc. stresses that users can still customize and change their search provider after the initial setup.

“As always, people can continue to customize and personalize their devices at any time after set up,” it wrote in an August blog post announcing the auction. “This includes selecting which apps to download, changing how apps are arranged on the screen, and switching the default search provider in apps like Google Chrome.”

Whatever your thoughts, EU users will see the option from March 1 when they start up a new phone or reset their OS. The choice will affect their search engine across Chrome and the home screen while installing the provider’s app.