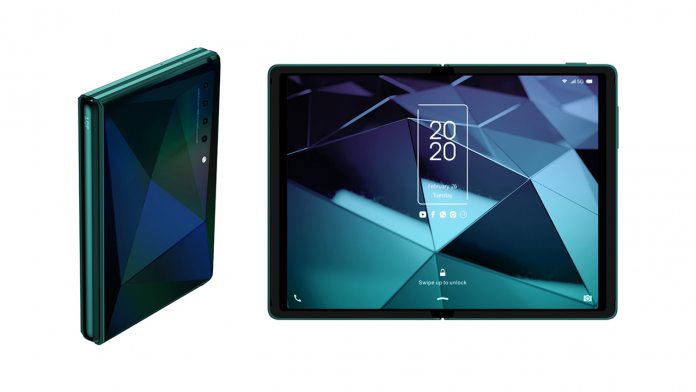 CES 2020 has kicked off with the usual array of TVs, but also some TV-makers that are continuing to branch out. This year, TCL let press play with another of its foldable phones, which it says will cost less than the $1500 Motorola Razr.

The vivid emerald hides a flexible 7.2-inch plastic display on the inside, much like the Galaxy Fold. Unlike Samsung’s effort, though, the TCL foldable can hold itself up at any degree of fold, opening that second screen for use as a keyboard in a laptop-like form factor.

TCL has emphasized that this is one of many prototypes it’s working on, and may not actually be what the device looks like in production. The devices shown as CES have been functional, though it forgoes a selfie camera in favor of four rear-mounted one. When folded, the screen closes completely flush, which should be good for durability.

The foldable will has telephoto, wide-angle, macro, and ultrawide lenses, but it wasn’t ready to reveal their specs quite yet. The same goes for its internals, which remain secret for now.

If rumors are to be believed, the device might ship late this year. Officially, though, TCL has been quiet, and we’re unlikely to hear more on that until at least WMC 2020. Even so, its unclear if consumers would prefer this variant of plastic-screened foldables or a dual-screen device like the Surface Duo, which is set for release around the same time.