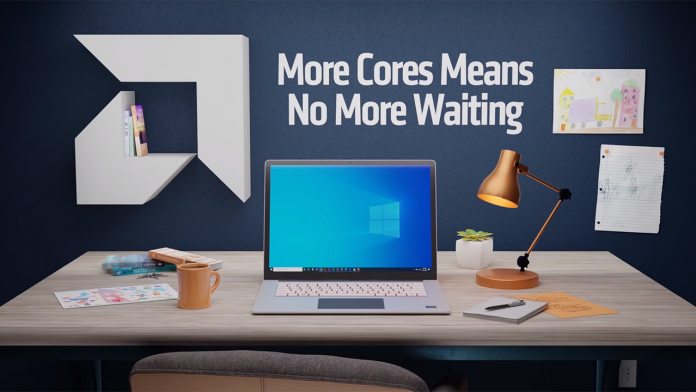 They’ll feature a U-series for ultrathin laptops, an H series for gaming and creations, and a Pro-series for ultra-thin professionals. In that U series is the flagship Ryzen 7 4800U, a 9 core 16 thread chip with a 1.8 GHz base clock and up to 4.2 GHz boost. It also holds 8 Radeon cores, which have been upgraded for 59% more performance.

In real-world benchmarks, AMD claims this led to a 90% increase in multi-thread Cinebench R20 performance vs Intel’s i7-1065G7 and 4% in single-thread. In terms of graphics, its testing saw a 28% performance increase in 3DMark Time Spy Extreme.

Of course, these kind of benchmarks are usually the best-case scenario and can be weighted to favor Ryzen. Power draw is a little more black and white, though, and AMD is promising that its 3rd Gen mobile processors have double the performance per watt in Cinebench.

The 4800U is available announced for Lenovo’s Yoga Slim 7, and AMD is promising dozens of OEM laptops with it in Q1. On the H-series side, AMD announced the flagship Ryzen 7 4800H, with 8C/12T at a base of 2.9 GHz and a boost of up to 4.2. This and the others in the H lineup will be 45W chips, rather than the 15W of the U-series. It’ll also be offering slower variants of both lines:

Meanwhile, the company appears to be making progress on its integrated graphics offerings vs Intel. Though its U line has fewer compute cores than last-gen, it claims the 4800U will still beat Intel in many games. Rocket League it says runs at 110fps at low settings vs Intel’s 80, while GTA V jumps from a barely playable 29 to a solid 53.

If AMD’s marketing is to be believed, things are looking very positive for the company. It’s gone from being trounced by Intel processors 5 years ago to having a highly competitive product stack across desktop, laptop, and consoles. Let’s just hope that battery life holds up on the go.