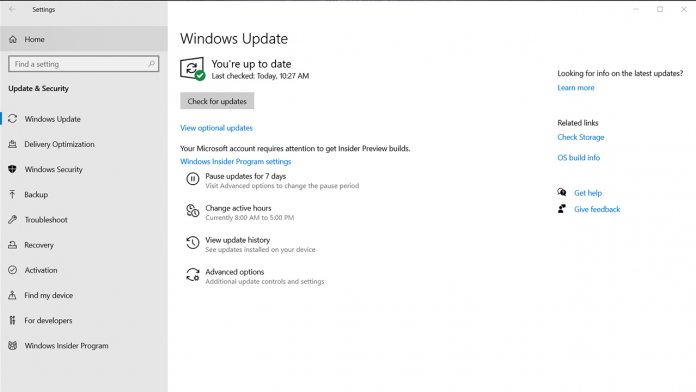 Windows 10 will give users a simple way to control which optional updates they install. As noted in the Insider Build 19536 release notes, Microsoft is making several changes to the update interface.

To start a ‘View optional updates’ link will appear underneath the usual ‘Check for Updates’ button. This will give users quick access to a list of drivers and other additions, which they’ll be able to tick and untick at will.

“For drivers, you no longer need to browse Device Manager for a specific device to update. Windows Update will automatically keep your drivers up to date,” explains Microsoft. “But if you’re having a problem, one of those optional drivers might help.”

The release date for this feature wasn’t specified. The natural target is Microsoft’s first update of next year – Windows 10 20H1 (2004). However, with OS features now decoupling from specific builds, it’s possible it’ll come later in 2020.

1956, of course, contains other, less exciting improvements. Microsoft is re-releasing an updated Korean IME, which is unlikely to be relevant to most of our readers. it has a new candidate selection window with clearer typography and an updated algorithm for text prediction. Korean spekaer or not, it’s always good to see the company properly supporting a variety of languages.

Perhaps more relevant are expansions to family groups in Windows 10. Microsoft is making it easier to set up a device used by multiple family members. When setting up a PC, there will be a ‘people in my family’ option when asked ‘Who will use this device’. Selecting it will take you straight to family group setup once they get to the desktop, generally making things more streamlined.

A previous report suggested that Windows 10 20H1 could reach users as early as this month. With December coming to a close, that’s looking incredibly unlikely, but it’s thought sources may have actually meant RTM (Release to Manufacturing). Microsoft usually signs off on builds a month before they reach the public, so we may see some of these features in January or February.